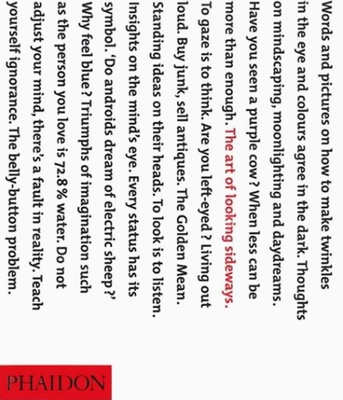 The Art of Looking Sideways (Hardcover)

The Art of Looking Sideways is a primer in visual intelligence, an exploration of the workings of the eye, the hand, the brain and the imagination. It is an inexhaustible mine of anecdotes, quotations, images, curious facts and useless information, oddities, serious science, jokes and memories, all concerned with the interplay between the verbal and the visual, and the limitless resources of the human mind. Loosely arranged in 72 chapters, all this material is presented in a wonderfully inventive series of pages that are themselves masterly demonstrations of the expressive use of type, space, color and imagery.

This book does not set out to teach lessons, but it is full of wisdom and insight collected from all over the world. Describing himself as a visual jackdaw, master designer Alan Fletcher has distilled a lifetime of experience and reflection into a brilliantly witty and inimitable exploration of such subjects as perception, color, pattern, proportion, paradox, illusion, language, alphabets, words, letters, ideas, creativity, culture, style, aesthetics and value.

The Art of Looking Sideways is the ultimate guide to visual awareness, a magical compilation that will entertain and inspire all those who enjoy the interplay between word and image, and who relish the odd and the unexpected.

Alan Fletcher belongs to that elite international group of designers who have transcended the conventional boundaries of their craft. He is a founder member of the design group Pentagram, with whom he has stayed for 20 years. He now works independently from his own studio in London. He is consultant Art Director to Phaidon Press.

Praise For The Art of Looking Sideways…

"The design book of the century may have already been written." – Design Week

"Alan Fletcher’s book challenges both dogma and habit by questioning how we see things, how we read things and how we understand things." – Royal College of Art, London

"This book will delight anyone who enjoys unexpected visual and verbal play, cultural and historical observations and insights, and staggering amounts of trivia and anecdotes." – Library Journal