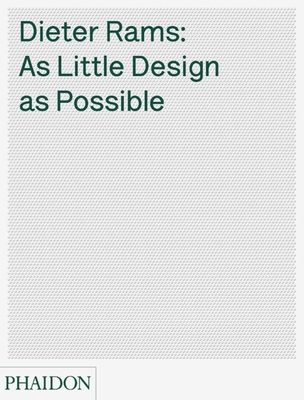 As Little Design as Possible

Dieter Rams is one of the most influential product designers of the twentieth century. Even if you don't immediately recognize his name, you have almost certainly used one of the radios, clocks, lighters, juicers, shelves or hundreds of other products he designed. He is famous not only for this vast array of well-formed products, but for his remarkably prescient ideas about the correct function of design in the messy, out-of-control world we inhabit today. These ideas are summed up in his 'ten principles' of good design: good design is innovative, useful, and aesthetic. Good design makes a product easily understood. Good design is unobtrusive, honest, durable, thorough, and concerned with the environment. Most of all, good design is as little design as possible.

In that spirit, this monograph is as little book as possible. It is a clear, comprehensive and beautiful presentation of Dieter Rams' life and his work. It is a must-have book for anyone interested in Rams' work, his legacy, and his ideas about how to live.


Praise For Dieter Rams: As Little Design as Possible…

"Shines by painting a refreshingly realistic picture of the design process... The easiest way to describe Mr. Rams’s impact on design is to say that he made Braun the “Apple” — in other words the It-brand — of its time."—Alice Rawsthorn, International Herald Tribune

"While many of the books about Dieter Rams are predominantly dry catalogues, Lovell's book examines the relevance of his work from a contemporary design standpoint by featuring interviews with some of today's top industrial designers..."—Apphia Michael, Wallpaper.com

"As Little Design as Possible is well-structured, thorough and provides background context to the many facets of Rams’s career, and also considers the continuation of his Ten Principles of Good Design."—Thomas Phongsathorn, V&A (Victoria and Albert Museum magazine)

"The design bible from the greatest industrial designer of the 20th century." —Tomas Maier, Esquire

Dieter Rams was born in Wiesbaden, Germany in 1932. In 1955 he began work at Braun, a company at which he became head of design in 1961, and at which he stayed until 1995. While there, he produced and oversaw some of the seminal products of the twentieth century, including radios, shavers and kitchen appliances. At the same time, he designed furniture for a small company, Vitsoe + Zapf (later Vitsoe), which is still in production today. In addition to his work as a designer and design manager, he is well known as a lecturer and for his "ten commandments" of good design, which advocate innovative, useful and durable products.

Sophie Lovell was born in London. After graduating from Chelsea College of Art & Design, she moved to Berlin in 1994. She is an artist, designer, writer, art director, consultant and has been a long‐term contributing editor and the German editor of Wallpaper* magazine. She is the author of several books including Limited Edition: Prototypes, One‐Offs and Design Art Furniture, This Gun Is for Hire and Furnish – Furniture and Interior Design for the 21st Century.

Dr. Klaus Kemp is the Head of Exhibitions at the Frankfurt Museum of Applied Arts. He was previously head of the culture department of the city of Frankfurt, and of the municipal galleries located in the former Karmeliterkloster (Karemliter Monastery) and the Leinwandhaus. Since 1998, he has been an associate lecturer in design history and theory and public design in Nurnberg, Wiesbaden and Wurzburg and since 2008, honorary professor at Rhein Main University of Applied Science in Wiesbaden. He has published numerous articles in the fields of architecture, design and fine arts.

Jonathan Ive is senior vice‐president of design at Apple Inc. He is responsible for the design of some of the most iconic and well‐used objects of the late twentieth century, including the iMac, iBook, Powerbook, iPod, and the iPhone.