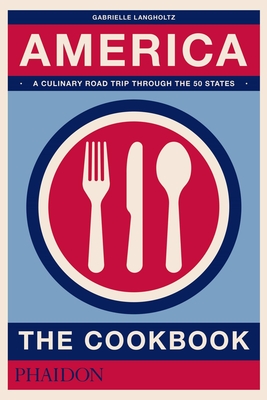 With 800 home-cooking recipes, America: The Cookbook is a celebration of the remarkable diversity of American food and food culture state by state. Features 50 essays and menus from a 'who's who' of 100 foremost food experts and chefs.

America: The Cookbook is the first book to document comprehensively – and celebrate – the remarkable diversity of American cuisine and food culture. A thoroughly researched compendium of 800 home-cooking recipes for delicious and authentic American dishes, America: The Cookbook explores the country's myriad traditions and influences, regional favorites and melting-pot fusion – the culinary heritage of a nation, from appetizers to desserts and beyond. A unique state-by-state section features essays and menus from a 'who's who' of 100 foremost food experts and chefs.


Praise For America: The Cookbook…

"This book gets it right."—Andrew Zimmern, award-winning television host and author

"America: The Cookbook is an ambitiously-researched compendium... that celebrates the nuances of America's food heritage in the form of 800 regionally treasured recipes." —New Worlder

"An ode to incredible food and food culture this great land has to offer." —Cool Material

"[T]he most exuberant celebration yet of our culinary melting pot... Every turn of the page delivers a new delight or an old friend, transforming Langholtz's cookbook into an amble through the abundance of the splendid, sprawling American table." —Bookpage

"Langholtz sets out to document all the nooks and crannies of American cuisine, and she succeeds spectacularly... Essays from influential chefs and food writers from each state add depth and perspective to the book... Rather than simply offering a rote recitation of well-worn classics, Langholtz artfully includes recipes that show America's kaleidoscopic culinary landscape." —Publishers Weekly, Starred review

"Google "American food", hit "Images" and behold this great nation's cuisine in all its glory: lurid hotdogs dripping in luminescent sauce, greasy burgers piled a foot high and sickly sweet pancakes ready to rot your teeth. This is, of course, an unfair pastiche of what the US brings to the world's culinary table. But these reference points are all too common. This is a key driving force behind an exhaustive new tome... "None foresaw the day when chefs would boast of California wine, New Jersey asparagus, Colorado lamb, or American cheese," says Gabrielle Langholtz in her introduction. "I wrote this book to refute this misconception that American food means homogenised processed blandness. I come to bury the burger". Apart from being an American who edits food magazines, Ms Langholtz attributes the passion for her project to her parents, who would take her the length and breadth of the US as a child to experience the country's culinary delights... An education that, backed up by exhaustive research, is presented comprehensively in the book, from starters to puddings, from state to state, with recipes and chef interviews throughout."—MrPorter.com

"After years of publishing massive tomes devoted to the home cuisine of such countries as Italy, France, and Spain, Phaidon sets its sights on America, sending author Gabrielle Langholtz on a quest to document all the nooks and crannies of American cuisine." —WNYC - The Leonard Lopate Show

"The must-have kitchen bible... A heavyweight contender for space on your shelf alongside requisite copies of Mark Bittman's How to Cook Everything and Julia Child's Mastering the Art of French Cooking... It acknowledges the contributions not only of this continent's indigenous peoples but also those of refugee and immigrant populations that have taken hold in unlikely places."—Bloomberg

"To call America: The Cookbook a tome is an understatement."—Arkansas Democrat-Gazette

Gabrielle Langholtz has travelled extensively throughout America and for a decade was the award-winning editor of Edible Manhattan and Edible Brooklyn. Previously, she was the head of special projects and publicity at the New York City Greenmarket and authored The New Greenmarket Cookbook. She resides in Pennsylvania, though has lived in many states.