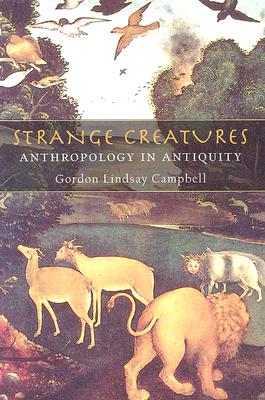 In ancient Greek and Roman thinking, whether the world is flat or spherical it will have imaginary boundaries and liminal areas where the norms of nature and culture are thought to break down. Analogies are constantly drawn between 'primitive' peoples at the 'edges of the world' and 'primitive' people in prehistory. Distance, both in time and space, leads to difference, and the idea that strange things happen out there or happened back then dominates Greek and Roman thinking on other cultures.

This book examines ancient ideas of the creation of the world, the beginnings of life and origin of species, humans and animals, utopias and blessed islands, and 'barbarian' cultures beyond the Mediterranean world, before going on to trace the influence of ancient anthropological and ethnological thought on the Middle Ages and the Renaissance.We begin with primordial chaos and end with the invention of the Americas, taking in on the way many strange creatures, among them the noble or ignoble savages of Britain, Gaul and Ireland, the Man-faced Ox-creatures of Empedocles, the Dog-heads of India, the Amazons, Centaurs, Columbus, and the Tupinamba of Brazil.