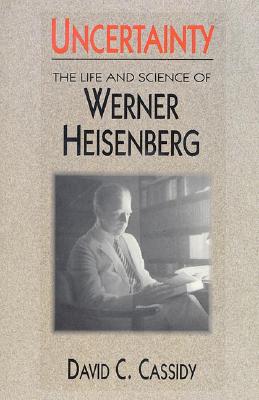 The Life and Science of Werner Heisenberg

Werner Heisenberg's genius and his place at the forefront of modern physics are unquestioned. His decision to remain in Germany throughout the Third Reich and his role in Hitler's atomic bomb project are still topics of heated debate. "UNCERTAINTY" is David Cassidy's compelling portrait of this brilliant, ambitious, and controversial scientist. It is the definitive Heisenberg biography, as well as a striking evocation of the development of quantum physics, the rise of Nazism, and the dawn of the atomic age.

For his book, Uncertainty: The Life and Science of Werner Heisenberg, David C. Cassidy was awarded the 1992 American Institute of Physics Science Writing Award in Physics and Astronomy. An associate professor of the History of Science at Hofstra University, Long Island, New York, Cassidy served as associate editor of The Collected Papers of Albert Einstein.

Praise For Uncertainty: The Life and Science of Werner Heisenberg…

"A monumental effort. On the controversies about Heisenberg's behavior during the Hitler regime, Cassidy is clear and reasonable."--The New York Review of Books

"An excellent work in its comprehensiveness and accuracy, and in its success in recreating the personal drama of one of the greatest and most influential scientists of this century."--The London Times Higher Education Supplement

"David Cassidy has written the definitive biography of a great and tragic physicist. Uncertainty is thorough, judicious, and revealing."--Richard Rhodes, author of The Making of the Atomic Bomb