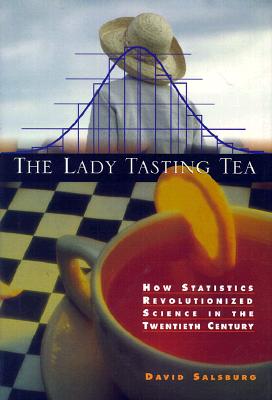 How Statistics Revolutionized Science in the Twentieth Century

At a summer tea party in Cambridge, England, a lady states that tea poured into milk tastes differently than that of milk poured into tea. Her notion is shouted down by the scientific minds of the group. But one guest, by the name Ronald Aylmer Fisher, proposes to scientifically test the lady's hypothesis. There was no better person to conduct such a test. For Fisher had brought to the field of statistics an emphasis on controlling the methods for obtaining data and the importance of interpretation. He knew that how the data was gathered and applied was as important as the data themselves.

In The Lady Tasting Tea, readers will encounter not only Ronald Fisher's theories (and their repercussions), but the ideas of dozens of men and women whose revolutionary work affects our everyday lives. Writing with verve and wit, author David Salsburg traces the rise and fall of Karl Pearson's theories, explores W. Edwards Deming's statistical methods of quality control (which rebuilt postwar Japan's economy), and relates the story of Stella Cunliff's early work on the capacity of small beer casks at the Guinness brewing factory.

The Lady Tasting Tea is not a book of dry facts and figures, but the history of great individuals who dared to look at the world in a new way.

Praise For The Lady Tasting Tea: How Statistics Revolutionized Science in the Twentieth Century…

"A fascinating description of the kinds of people who interacted, collaborated, disagreed, and were brilliant in the development of statistics."
—Barbara A. Bailar, Senior Vice-President, National Opinion Research Center

"Salsburg's book is the story of statistical theory in the 20th century, its time of triumph, and of the mathematical/scientific geniuses who made it happen. He writes with both experience and insight, and with a happy lack of technical barriers between the reader and his subject. Particularly well told is the story of Ronald Fisher, the double genius who founded both mathematical statistics and mathematical genetics. If scientists were judged by their influence on science then Fisher would rank with Einstein and Pauling at the top of the modern ladder."
—Brad Efron, Professor of Statistics, Stanford University

David Salsburg is a former Senior Research Fellow at Pfizer, Inc., and currently works as a private consultant. He is a fellow of the American Statistical Association and received a lifetime achievement award from the Pharmaceutical Research and Manufacturing Association. The author of three technical books and over fifty scientific articles, Salsburg has taught at Connecticut College, Harvard School of Public Health, Rhode Island College, Trinity College, the University of Connecticut, and the University of Pennsylvania. He lives in New London, Connecticut.
Loading...
or
Not Currently Available for Direct Purchase