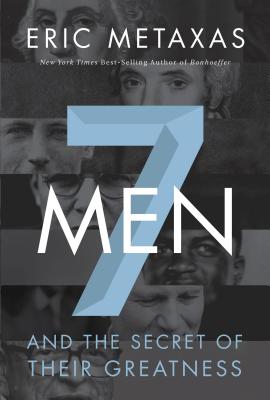 And the Secret of Their Greatness

In Seven Men, New York Times best-selling author Eric Metaxas presents seven exquisitely crafted short portraits of widely known--but not well understood--Christian men, each of whom uniquely showcases a commitment to live by certain virtues in the truth of the gospel.

Written in a beautiful and engaging style, Seven Men addresses what it means (or should mean) to be a man today, at a time when media and popular culture present images of masculinity that are not the picture presented in Scripture and historic civil life. What does it take to be a true exemplar as a father, brother, husband, leader, coach, counselor, change agent, and wise man? What does it mean to stand for honesty, courage, and charity, especially at times when the culture and the world run counter to those values?

Each of the seven biographies represents the life of a man who experienced the struggles and challenges to be strong in the face of forces and circumstances that would have destroyed the resolve of lesser men. Each of the seven men profiled--George Washington, William Wilberforce, Eric Liddell, Dietrich Bonhoeffer, Jackie Robinson, John Paul II, and Charles Colson--call the reader to a more elevated walk and lifestyle, one that embodies the gospel in the world around us.

Eric Metaxas is the author of the New York Times bestseller Amazing Grace, Everything You Always Wanted to Know About God (But Were Afraid to Ask), Everything Else You Always Wanted to Know About God, and thirty children's books. He is founder and host of Socrates in the City in New York City, where he lives with his wife and daughter. His writing has appeared in the New York Times, the Atlantic, Washington Post, Books & Culture, Christianity Today, Marks Hill Review, and Fist Things. He has written for VeggieTales and Rabbit Ears Productions, earning three Grammy nominations for Best Children's Recording.
or support indie stores by buying on
Copyright © 2020 American Booksellers Association