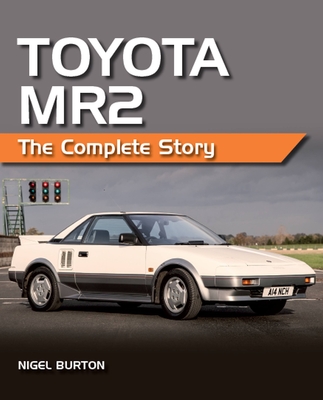 Toyota MR2 - The Complete Story tells of the trials and tribulations the team faced bring the MR2 to market, how global events almost conspired to force Toyota to cancel the project and how it survived against all odds to become one of the company's best-loved cars.

This new paperback edition for 2022 covers all three generations of models: the first-generation AW11 - Car of the Year Japan, 1984-1985; second-generation SW20, with a new 2,0 litre 3S-GTE engine, and the third-generation ZZW30/MR2 Roadster.

The MR2 in motorsport and special editions and Zagato's VM180 are also covered. With detailed specification guides, archive photos and beautiful new photography, this book is the definite dossier of a true Japanase classic and is a must for every MR2 owner and sports car enthusiast.

Nigel Burton has been testing and writing about cars for more than two decades. The Toyota MR2 holds a special place in his heart, as it was the first car he road tested as a young journalist and he once owned a much-cherished MR2 Mk II. Currently Motoring Editor of The Northern Echo, Nigel is a former motoring correspondent for ITV Teletext. He previously wrote A History of Electric Cars, also published by Crowood.