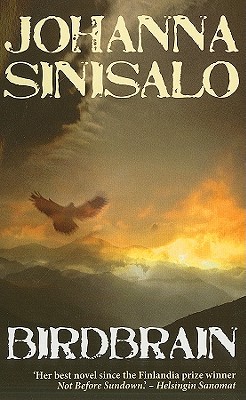 From the author of the critically acclaimed Troll, the new novel from Johanna Sinisalo is full of her trademark style, surreal invention, and savage humor Set in Australasia, this is the story of a young Finnish couple who have embarked on the hiking trip of a lifetime, with Heart of Darkness as their only reading matter. Conrad’s dark odyssey turns out to be a prescient choice as their trip turns into a tortuous thriller, with belongings disappearing, and they soon find themselves at the mercy of untamed nature, seemingly directed by the local kakapo—a highly intellegent parrot threatened with extinction. This is a skillful portrait of the unquenchable desire of Westerners for the pure and the primitive, revealing the dark side of the explorer’s desire—the insatiable need to control, to invade, and leave one’s mark on the landscape. But what happens when nature starts to fight back?

Johanna Sinisalo is a Finnish science fiction and fantasy writer who won the James Tiptree Jr. Award, as well as the most acclaimed Finnish literary prize, the Finlandia, for her novel Troll. She also edited The Dedalus Book of Finnish Fantasy and she was nominated for a Nebula Award for her short story "Baby Doll."
Loading...
or
Not Currently Available for Direct Purchase