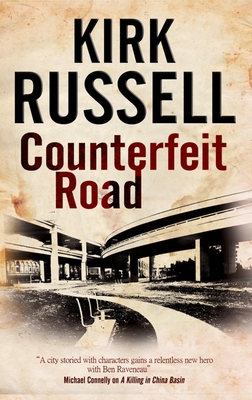 Twenty-two years to the day, a videotape of an unsolved 1989 murder arrives at the San Francisco Homicide Detail. So starts Counterfeit Road, second of the series and San Francisco homicide inspector Ben Raveneau's toughest cold case. The victim, Alan Krueger, a former Secret Service agent, carried in his coat sixty-one hundred dollar bills. In 1989 the Secret Service inspected the bills and called them legitimate. They take another look now and say, counterfeit.

But there's more. There's a link to the present they don't want to talk much about. Raveneau studies the videotape. He pores over the old case files. He hunts for the couple who reported Krueger's body and enlists the help of a retired homicide inspector. When a young man steps forward with yellowed photos the investigation moves to Hawaii. What made little sense, makes more as Raveneau turns misaligned pieces and realizes something darker is rapidly evolving. But who can he convince? If no one listens, can he, his partner, and one FBI agent stop the attack from happening?