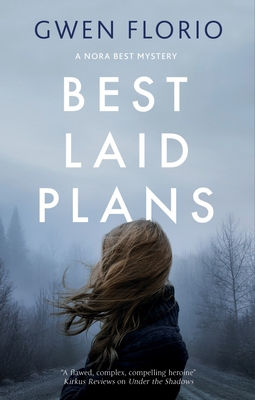 In the first of a new mystery series, we meet Nora Best as she flees her old life, cheating husband and all, and takes to the road with an Airstream trailer. Nora Best is the envy of her friends. She's just turned fifty and has traded in her home with The Perfect-Ass Husband for an Airstream trailer and an adventure of a lifetime across the US. But during their leaving party, Nora finds her husband in a compromising position with a friend. Storming out of the party she jumps into her truck with no idea how to tow the Airstream or where she's going. Nora ends up in a campground in the mountains of Wyoming, drowning her sorrows with its managers, Brad and Miranda. When she is woken by a frantic Miranda after Brad has disappeared and bloodstains have been found around the campsite, Nora finds herself caught up in an adventure she could never have expected . . . facing a charge of murder.

Gwen Florio grew up in a farmhouse filled with books and a ban on television. After studying English at the University of Delaware, she began a thirty-plus year career in journalism that has taken her around the country and to more than a dozen countries, including several conflict zones. Her first novel in the Lola Wick mystery series, Montana won the Pinckley Prize for Crime Fiction and the High Plains Book Award, and was a finalist for the Shamus Award, an International Thriller Award and a Silver Falchion Award. She has since released four other books in the Lola Wick series and one standalone novel. Best Laid Plans is her first novel with Severn House. www.gwenflorio.net
Loading...
or support indie stores by buying on