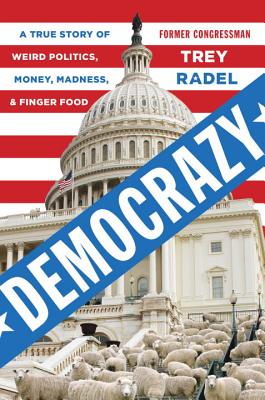 How the Washington sausage really gets made: a brutally honest, outrageous memoir by former GOP congressman Trey Radel.

"Radel, the former congressman busted on cocaine charges, has published a memoir that delves into the forgotten concept of shame." - Huffington Post

"DEMOCRAZY is the most puckish political memoir in recent memory ... enough to make you wish he were still in the House's GOP caucus under the Trump administration." - Bookforum

In 2013, when Washington D.C. law enforcement learned that Trey Radel, then a Republican congressman from Florida, had bought cocaine, he quickly became the target of a police sting. In October of that year, Radel was arrested for attempting to buy cocaine from an undercover cop, and subsequently became the subject of intense media coverage and scrutiny. When Radel resigned in 2014, he left with insider knowledge that remains unknown to most American citizens.

Democrazy is Radel's candid account of the making of a modern political star and the inner workings of Congress. In his memoir, Radel recounts his early days as a TV news reporter and radio show host before running for Congress in 2012, a decision that would launch the new, infamous chapter of his life. Radel entered the political sphere with the same ideological fervor of most first-time politicians--he loved America and wanted to serve his country and its people. But Radel's optimism waned as he witnessed the wheelings and dealings of Congress's most powerful members. Told with humor and irreverence, Radel's memoir is an entertaining, fascinating journey of an unlikely politician.

"[Radel] offers a humorous glimpse into his short-lived political career...light anecdotes are contrasted with the soul-searching that followed his drug arrest, adding a thoughtful side to the carnival that is Congress. Radel's book gives the infamously unpopular body a breath of fresh air, which is a hopeful sign in this murky current political climate." --Publishers Weekly
or
Buy Here
(This book is on backorder)
Copyright © 2020 American Booksellers Association