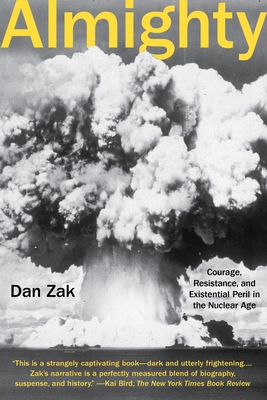 Courage, Resistance, and Existential Peril in the Nuclear Age

ON A TRANQUIL SUMMER NIGHT in July 2012, a trio of peace activists infiltrated the Y-12 National Security Complex in Oak Ridge, Tennessee. Nicknamed the “Fort Knox of Uranium,” Y-12 was supposedly one of the most secure sites in the world, a bastion of warhead parts and hundreds of tons of highly enriched uranium—enough to power thousands of nuclear bombs. The three activists—a house painter, a Vietnam War veteran, and an 82-year-old Catholic nun—penetrated the complex’s exterior with alarming ease; their strongest tools were two pairs of bolt cutters and three hammers. Once inside, these pacifists hung protest banners, spray-painted biblical messages, and streaked the walls with human blood. Then they waited to be arrested.

WITH THE BREAK-IN and their symbolic actions, the activists hoped to draw attention to a costly military-industrial complex that stockpiles deadly nukes. But they also triggered a political and legal firestorm of urgent and troubling questions. What if they had been terrorists? Why do the United States and Russia continue to possess enough nuclear weaponry to destroy the world several times over?

IN ALMIGHTY, WASHINGTON POST REPORTER Dan Zak answers these questions by reexamining America’s love-hate relationship to the bomb, from the race to achieve atomic power before the Nazis did to the solemn 70th anniversary of Hiroshima. At a time of concern about proliferation in such nations as Iran and North Korea, the U.S. arsenal is plagued by its own security problems. This life-or-death quandary is unraveled in Zak’s eye-opening account, with a cast that includes the biophysicist who first educated the public on atomic energy, the prophet who predicted the creation of Oak Ridge, the generations of activists propelled into resistance by their faith, and the Washington bureaucrats and diplomats who are trying to keep the world safe. Part historical adventure, part courtroom drama, part moral thriller, Almighty reshapes the accepted narratives surrounding nuclear weapons and shows that our greatest modern-day threat remains a power we discovered long ago.

Dan Zak is a reporter for The Washington Post. He has written a wide range of news stories, narratives, and profiles while on local, national, and foreign assignments. He is from Buffalo, N.Y., and lives in Washington, D.C.

Praise For Almighty: Courage, Resistance, and Existential Peril in the Nuclear Age…

“This is a strangely captivating book—dark and utterly frightening…Zak’s narrative is a perfectly measured blend of biography, suspense, and history. He skillfully uses the small, finite story of the Y-12 protest to explore our national identity as a people whose culture is now intimately connected with things nuclear.” –Kai Bird, The New York Times Book Review

"With nuns splashing blood, countries making pledges, diplomats working to reduce the size of world-destroying arsenals, suppliers cheering a new Cold War, Zak demonstrates that we’re all in it together. And he’s honest enough to report as well the hard truth that none of us yet knows how to get out of it alive." –Richard Rhodes, The Washington Post (author of The Making of the Atomic Bomb)

“This book is essential reading for any American.” –America Magazine

“Centering on a single episode, a powerful declaration of conscience, a Washington Post reporter tells an intensely unsettling story about living with our nuclear arsenal. In July 2012, cutting through fences topped with razor wire and avoiding guards, guns, sensors, armored cars, and alarms, an 80-year-old nun, a Vietnam veteran, and a housepainter, all deeply religious, all affiliated with the pacifist Plowshares movement, broke into the Y-12 National Security Complex in Oak Ridge, Tennessee, the "Fort Knox of Uranium."… it's the moral convictions demonstrated by Zak's three holy fools that will remain with readers. A scrupulously reported, gracefully told, exquisitely paced debut.” –Kirkus (starred review)

“Zak takes the reader on a journey into the still-vibrant realm of the US nuclear arms complex. His guides are an aging nun, a house-painter and other everyday Americans who realize the senseless violence at the center of the nation’s national security. A brilliant portrayal of these heroes of our time.” –Kate Brown, author of Plutopia

"Zak gracefully synthesizes the stories of the politicians and bureaucrats controlling stockpiles of weapons and those of the activists working to disarm them." –Publisher's Weekly
or support indie stores by buying on
Copyright © 2020 American Booksellers Association