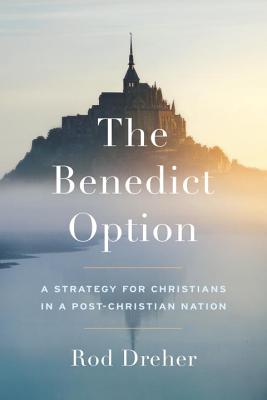 "Already the most discussed and most important religious book of the decade." —David Brooks

In this controversial bestseller, Rod Dreher calls on American Christians to prepare for the coming Dark Age by embracing an ancient Christian way of life.

From the inside, American churches have been hollowed out by the departure of young people and by an insipid pseudo–Christianity. From the outside, they are beset by challenges to religious liberty in a rapidly secularizing culture. Keeping Hillary Clinton out of the White House may have bought a brief reprieve from the state’s assault, but it will not stop the West’s slide into decadence and dissolution.

Rod Dreher argues that the way forward is actu­ally the way back—all the way to St. Benedict of Nur­sia. This sixth-century monk, horrified by the moral chaos following Rome’s fall, retreated to the forest and created a new way of life for Christians. He built enduring communities based on principles of order, hospitality, stability, and prayer. His spiritual centers of hope were strongholds of light throughout the Dark Ages, and saved not just Christianity but Western civilization.

Today, a new form of barbarism reigns. Many believers are blind to it, and their churches are too weak to resist. Politics offers little help in this spiritual crisis. What is needed is the Benedict Option, a strategy that draws on the authority of Scripture and the wisdom of the ancient church. The goal: to embrace exile from mainstream culture and construct a resilient counterculture.

The Benedict Option is both manifesto and rallying cry for Christians who, if they are not to be conquered, must learn how to fight on culture war battlefields like none the West has seen for fifteen hundred years. It's for all mere Chris­tians—Protestant, Catholic, Orthodox—who can read the signs of the times. Neither false optimism nor fatalistic despair will do. Only faith, hope, and love, embodied in a renewed church, can sustain believers in the dark age that has overtaken us. These are the days for building strong arks for the long journey across a sea of night.

Praise For The Benedict Option: A Strategy for Christians in a Post-Christian Nation…

“The Trump era…has not made The Benedict Option…less timely, but more so….Conservative Christians active in politics have no choice but to do the best they can from that unsteady, wavering position. But only a robust counterculture, a healthy sense of their own freakishness and, yes, a few St. Benedicts will save them if they fall.”
—Ross Douthat, The New York Times

"The Benedict Option is already the most discussed and most important religious book of the decade."
—David Brooks, The New York Times

"I'm more missionary than monastery, but I think every Christian should read this book. Rod Dreher is brilliant, prophetic, and wise. Even if you don't agree with everything in this book, there are warnings here to heed, and habits here to practice.”
—Russell Moore, president, The Ethics & Religious Liberty Commission of the Southern Baptist Convention

“A terrific book: provocative in its content, shrewd in its insights, vivid and engaging in its style.  The strength of The Benedict Option is not just its analysis of our culture’s developing problems but its outline of practical ways Christians can survive and thrive in a dramatically different America.  This is an invaluable tool for understanding our times and acting as faithful believers.”
—Charles J. Chaput, O.F.M. Cap., Archbishop of Philadelphia

"This is the kind of book I am going to use to get the thoughtful people in my congregation reading and discussing. It is going to be helpful to the very people who have to live on the front line."
—Carl R. Trueman, Westminster [PA] Theological Seminary; writer for First Things

“An insightful and optimistic plan of action for Christians who are starting to realize just how hostile American culture is to their faith.”
—Mollie Ziegler Hemingway, senior editor, The Federalist

“Deeply convicting and motivating. This book will be a grounding force for the Church in the decades ahead.”
—Gabe Lyons, author of Good Faith; president of Q Ideas

ROD DREHER is a senior editor at The American Conservative and the author of Crunchy Cons, How Dante Can Save Your Life, and The Little Way of Ruthie Leming.
Loading...
or
Not Currently Available for Direct Purchase