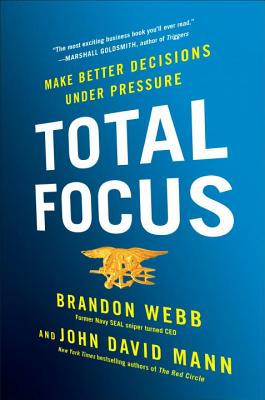 What do you do at work when a hundred crises seem to be happening at the same time? Do you pick just one priority or try to put out every fire? How can you stay composed, figure out what really matters, and act decisively?

When former U.S. Navy SEAL sniper Brandon Webb transitioned to civilian life, he struggled to get his first startup business off the ground. He raised millions for his new venture, only to lose it all as problems spiraled out of his control.

In the wake of that failure, Webb realized that successful entrepreneurs need a skill he had already mastered: total focus. SEAL snipers define it as the ability to filter out noise and chaos so you can make life-or-death decisions under the extreme conditions of combat. If he could maintain total focus while staring through crosshairs at a man who might (or might not) be an Al Qaeda terrorist, surely he could do the same in the business world.

So Webb started over, applying total focus to a new startup, a media company called Hurricane Group. His approach was so effective that in just five years, Hurricane grew to have a staff of over fifty, an audience in the tens of millions, and a valuation of more than $100 million.

In this book, Webb teaches us to make better decisions under extreme pressure by emulating the habits of his fellow warriors, as well as other skills he learned on the job and from great friends and business leaders like Solomon Choi of 16 Handles, Matt Meeker of BarkBox, and Betsy Morgan of the Huffington Post and TheBlaze. For instance, you’ll discover:

·  The difference between total focus and tunnel vision is developing total situational awareness: the ability to spot opportunities and threats without getting distracted from your goal.
·  You can overcome indecisiveness and hesitancy by accepting violence of action: a decision to move forward with an imperfect plan, knowing that even the best-laid plans go wrong.
·  Entrepreneurs must learn to embrace the suck, refusing to quit when the going gets brutal, and recognizing that unexpected challenges may reveal your best shot at success.

By following the tactics and wisdom of a generation of legendary snipers and business leaders, you’ll find the clarity of mind you need to accomplish your own mission—whatever it takes.

BRANDON WEBB is the CEO of Hurricane Group, Inc. As a U.S. Navy chief and SEAL with more than a decade of service, he served multiple combat deployments to the Middle East and Afghanistan and was the head instructor at the Navy SEAL sniper school, which produced such students as Chris Kyle, Marcus Luttrell, and other legendary snipers. He is author of the New York Times bestseller The Red Circle, Among Heroes, The Killing School, The Making of a Navy SEAL, and The Power of Thought.

JOHN DAVID MANN is Webb’s coauthor on The Red Circle, Among Heroes, The Making of a Navy SEAL, and The Killing School, as well as coauthor (with Bob Burg) of the national bestseller The Go-Giver.

“What an incredible ride! Watching as a former Navy SEAL sniper approaches the challenges and complexities in growing from start-up to $100 million–plus in five short years is a master class in business and leadership.”
—David Bach, author of The Automatic Millionaire and Start Late, Finish Rich

“What do the training, leadership, and entrepreneurial skills of a Navy SEAL have to with running a successful business? As it turns out, just about everything. And you won’t find a better guide and mentor than Brandon Webb, former Navy SEAL sniper turned hugely successful CEO. In Total Focus, Webb and Mann provide a game plan based on the mind-set and skill sets that will result in a business that you’re passionate about, that is lucrative, and that provides extreme value to those you serve.”
—Bob Burg, coauthor of The Go-Giver and author of Adversaries into Allies

“The most engaging, exciting business book you’ll ever read.”
—Marshall Goldsmith, author of Triggers and What Got You Here Won’t Get You There; Thinkers50 #1 Most Influential Leadership Thinker in the World

“Brandon Webb’s transition from Navy SEAL to CEO provides inspiring insights on how leaders lead. Reading this book challenged me to raise my own personal leadership bar!”
—David Novak, author of Taking People with You

“Brandon has done a spectacular job at paying forward proven principles that will help you achieve greatness in your personal and professional lives. I highly recommend this book!”
—Jairek Robbins, performance coach; author of Live It!; recipient of the Congressional Award Gold Medal

“Brandon has done a spectacular job at paying forward proven principles that will help you achieve greatness in your personal and professional lives. I highly recommend this book!”
—Jairek Robbins, performance coach; author of Live It!; recipient of the Congressional Award Gold Medal
or
Not Currently Available for Direct Purchase
Copyright © 2020 American Booksellers Association