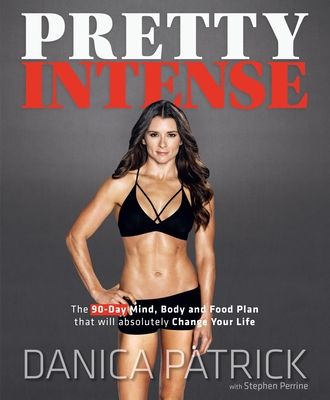 The 90-Day Mind, Body and Food Plan that will absolutely Change Your Life

America's NASCAR standout offers a 90-day program to sculpt your body, calm your mind, and achieve your greatest goals

Everything Danica Patrick does is Pretty Intense. A top athlete in her field, not to mention a fan favorite and the first woman to rule in her male-dominated sport, Danica approaches every aspect of life with the utmost intensity. Now, she shows you how you can apply her daily principles and transform your life for the better--and have fun while doing it.

Danica's 90-day high-intensity workout, protein-rich, paleo-inspired eating plan, and mental-conditioning program will get you leaner, stronger, and healthier than you've ever been before. By mixing full-body training and stretching exercises, her accessible workouts hit the holy trinity of fitness: strength, endurance, and flexibility. Bolstered by a customized eating plan for all-day energy, her program will also help you cultivate a mindset for limitless success. You will learn to aim your sights high, confront challenges and setbacks with confidence, and cross the finish line every time. Whether your goal is a stronger core, better skills in the kitchen, or a promotion at work, Danica's Pretty Intense plan will help you reach your highest potential.

Danica Patrick is a groundbreaking race car driver who ranks among the most popular and well-recognized athletes in America, according to a 2014 Harris poll. She has been named one of Time's Most Influential People, twice won the Kids' Choice Award for Favorite Female Athlete, and is the only major female sports figure who competes primarily among men. She has graced the cover of Sports Illustrated three times (as both an athlete and a swimsuit model), as well as ESPN, Shape, and numerous other sports and lifestyle magazines. Her television appearances range from the Tonight Show to The Simpsons to Chopped to Jay-Z's video for "Show Me What Ya Got." According to the most recent DBI results, Danica is recognized by 75 percent of the American public, outranking stars like Blake Shelton, Stephen Colbert and Ryan Reynolds, and is the most well-known figure in all of NASCAR.

Stephen Perrine is the Co-creator and Co-producer of Better Man, a nationally syndicated health and wellness television program for men, and Chief Content Officer of bettermanshow.com. He co-authored Serve to Win with tennis champion Novak Djokovic, and the New York Times bestseller Zero Sugar Diet. The former Editor in Chief of Best Life, Perrine has also served as Publisher of Rodale Books, Editorial Creative Director of Men’s Health, and Executive Editor of Maxim and Cosmopolitan. He is currently Special Projects Editor at AARP Publications.
Loading...
or support indie stores by buying on
(This book is on backorder)