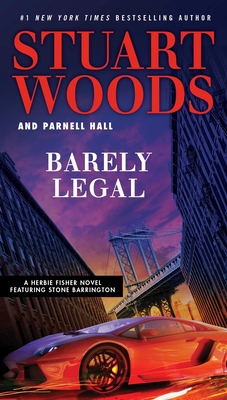 In the newest nonstop adventure from #1 New York Times-bestselling author Stuart Woods, the protégé becomes the heroas Herbie Fisher gets caught in a web of deceit, corruption, and greed.

Under the tutelage of Stone Barrington, Herbie Fisher has transformed from a bumbling sad sack into the youngest partner at the white-shoe law firm Woodman & Weld, and a man whose company is in high demand both because of his professional acumen and his savoir faire. But even his newly won composure and finely honed skills can't prepare him for the strange escapade he's unwittingly pulled into, and which--unbeknownst to him--has put him at the center of a bull's-eye. In the city that never sleeps there are always devious schemes afoot, and Herbie will have to be quick on his feet to stay one step ahead of his enemies...and they're closing in.

“Woods and Hall have crafted a fast-moving tale with a light touch....Crime fiction doesn’t get much more entertaining than this.”—Booklist (starred review)

“Herbie manages to stumble his way to the exciting, satisfying climax. The courtroom scenes are convincing, and a host of inept crooks will resonate with fans of Donald Westlake’s caper novels.”—Publishers Weekly

Stuart Woods is the author of more than eighty-five novels, including the #1 New York Times-bestselling Stone Barrington series. He is a native of Georgia and began his writing career in the advertising industry. Chiefs, his debut in 1981, won the Edgar Award. An avid sailor and pilot, Woods lives in Florida, Maine, and Connecticut.
Loading...
or
Not Currently Available for Direct Purchase