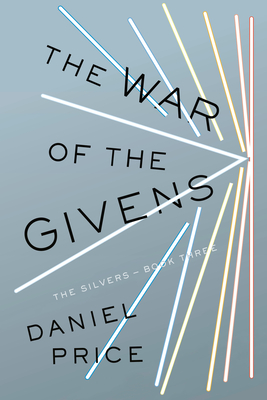 The War of the Givens (The Silvers Series #3)

Praise For The War of the Givens (The Silvers Series #3)…

Praise for Daniel Price and the Silvers trilogy

"Any hours spent reading The Flight of the Silvers will be time well spent."—BookPage

"You should read [The Flight of the Silvers]. I found it very difficult to put it aside to deal with my own life.... I'll be looking forward to the next installment."—SFcrowsnest

"A sharp, smart piece of science fiction. Price has not only recaptured the grand scale of Book One, but expanded upon it. It's a narrative that unspools cinematically in the mind's eye; there's a visual acuity at work here that is wonderful and rare. Here's hoping that the wait for Book Three will be a short one. After all, the world is running out of time."—Allen Adams, The Maine Edge

"Conjures a detailed, fantastic alternate Earth, populated with vulnerable, relatable characters from this Earth who readers will enthusiastically follow anywhere. Speculative fiction writers wear imagination like a suit of clothes, and Daniel Price has a closetful."—Robert Buettner, bestselling author of The Golden Gate

"A king-sized doorstopper epic of superhuman proportions. This sucker is jam-packed with X-Men by way of Fringe action scenes, each one carefully crafted and massive in scope.... Hugely cinematic, and packed to the rafters with fight scenes and conflict galore, The Song of the Orphans was well worth the wait. Fans will be pleased to take another trip to AltAmerica, but now begins the wait for book three. I shall wait patiently, or at least try to."—Michael Patrick Hicks, author of Convergence

Daniel Price is the author of Slick, The Flight of the Silvers, The Song of the Orphans, and The War of the Givens. He lives in Gilbert, Arizona, with his partner, Nancy. He cannot actually manipulate time.
Loading...
or support indie stores by buying on