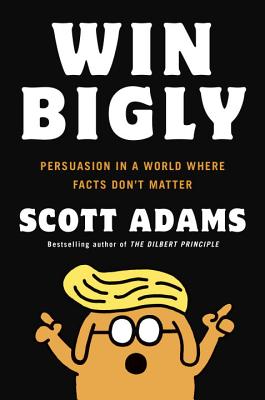 From the creator of Dilbert, an unflinching look at the strategies Donald Trump used to persuade voters to elect the most unconventional candidate in the history of the presidency, and how anyone can learn his methods for succeeding against long odds.

Scott Adams—a trained hypnotist and a lifelong student of persuasion—was one of the earliest public figures to predict Trump’s win, doing so a week after Nate Silver put Trump’s odds at 2 percent in his FiveThirtyEight.com blog. The mainstream media regarded Trump as a novelty and a sideshow. But Adams recognized in Trump a level of persuasion you only see once in a generation.

Trump triggered massive cognitive dissonance and confirmation bias on both the left and the right. We’re hardwired to respond to emotion, not reason. We might listen to 10 percent of a speech—a hand gesture here, a phrase there—and if the right buttons are pushed, we irrationally agree with the speaker and invent reasons to justify that decision after the fact.

The point isn’t whether Trump was right or wrong, good or bad. Win Bigly goes beyond politics to look at persuasion tools that can work in any setting—the same ones Adams saw in Steve Jobs when he invested in Apple decades ago. For instance:

·  If you need to convince people that something is important, make a claim that’s directionally accurate but has a big exaggeration in it. Everyone will spend endless hours talking about how wrong it is while accidentally persuading themselves the issue is a high priority.
·  Stop wasting time on elaborate presentations. Inside, you’ll learn which components of your messaging matter, and where you can wing it.
·  Creating "linguistic kill shots" with persuasion engineering (such as “Low-energy Jeb”) can be more powerful than facts and policies.

Adams offers nothing less than “access to the admin passwords to human beings.” This is a must-read if you care about persuading others in any field—or if you just want to resist persuasion from others.

Scott Adams is the creator of Dilbert, one of the most popular comic strips of all time. He has been a full-time cartoonist since 1995, after 16 years as a technology worker for companies like Crocker National Bank and Pacific Bell. His many bestsellers include The Dilbert Principle, Dogbert's Top Secret Management Handbook, and How To Fail At Almost Everything And Still Win Big. He is co-founder of WhenHub. He lives outside of San Francisco.

Praise For Win Bigly: Persuasion in a World Where Facts Don't Matter…

“Win Bigly taught me how to persuade my boss to treat me with slightly less contempt.”
—Dilbert

“I am deeply impressed by Scott Adams. I don’t know how anyone can write so many pages without using the word ‘doth.’”
—William Shakespeare

“I recommend this book to all mammals, big and small. It once turned a mole into a cheetah. I saw it with my own eyes.”
—Lord Byron

“If you only read one book this year, that’s one more than I did.”
—Mark Twain

“Scott taught me how to create a persuasive nickname for myself.”
—Alexander the Great

“If I’m being honest, Win Bigly is better than all other books and at least one play.”
—Abe Lincoln

“Win Bigly helped me escape from the secret room beneath the author’s shed.”
—Kristina Basham

“My life improved tremendously after I finished this book. If you ever write a book, I bet you’ll feel good when you’re done writing it too. Hey, why is my shed door open?”
—S. Adams
or
Not Currently Available for Direct Purchase
Copyright © 2020 American Booksellers Association