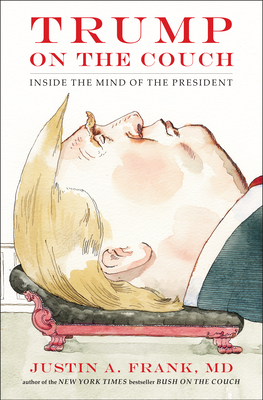 Trump on the Couch

Inside the Mind of the President

"A great public service--critical for our time."
--Bandy X. Lee, M.D., M.Div., Yale psychiatrist, expert on violence, and editor of The Dangerous Case of Donald Trump

The New York Times-bestselling author of Bush on the Couch shows that Donald Trump is mentally and emotionally unfit to execute the duties of President.

No president in the history of the United States has inspired more alarm and confusion than Donald Trump. As questions and concerns about his decisions, behavior, and qualifications for office have multiplied, they point to one primary question: Does he pose a genuine threat to our country? The American Psychiatric Association's Goldwater Rule constrains psychiatrists from offering diagnoses on public figures who are not patients and who have not endorsed such statements. But in Trump on the Couch Clinical Professor of Psychiatry Justin A Frank invokes the moral responsibility that compels him to speak out and present a full portrait of a man who presents us with a clear and present danger.

Using observations gained from a close study of Trump's patterns of thought, action, and communication, Dr. Frank uncovers a personality riddled with mental health issues. His analysis is filled with important revelations about our nation's leader, including disturbing insights into his childhood, his family, his business dealings, and his unusual relationship with alternative facts, including how


With our country itself at stake, Dr. Frank calls attention to the underlying narcissism, misogyny, deception, and racism that drive the President who endangers it. A penetrating examination of how we as a nation got here and, more important, where we are going, Trump on the Couch sounds a call to action that we cannot ignore.

Praise For Trump on the Couch: Inside the Mind of the President…

"I've known Trump a long time and I have even tried my own hand at psychoanalyzing him on television. But, Dr. Frank has shown a more complete picture inside our 45th President's mind than I ever dared to consider. Behind all Trump's tough guy theatrics, his petty cruelties and bloated ego is a tangled knot of pathologies that should terrify us all. Trump on the Couch is a great first step to sizing up the President's inner demons.”
—Donny Deutsch, Co-Host on MSNBC’s Morning Joe

"Trump On The Couch has spared me the extra grief of hoping against hope that our President will change. Dr. Frank’s analysis helps explain the genesis of Trump’s bullying, cruelty, dismissiveness, sexism, sadism, narcissism and more to help us understand that very sick man. Now I can brace myself in a more efficient way - not teetering between disbelief and denial but accepting what is, and continuing to resist."
—Joan Baez

“A breathtaking book! While I have maintained that a full psychological analysis is not possible from a distance, Dr. Frank has convinced me that there can be an exception.  A rare convergence of top-tier clinical prowess and rigorous research into high-quality data, Trump on the Couch is thoughtful, accurate, and responsibly informative in ways that make it a great public service—critical for our time.”
—Bandy X. Lee, M.D., M.Div., Yale psychiatrist, expert on violence, and editor of The Dangerous Case of Donald Trump

“Ordinarily, we rely on our presidents to help us contain our anxiety. According to Dr. Frank, this president needs us to contain his. Trump on the Couch lays out a compelling argument that Donald Trump relentlessly and defensively locates his own dishonesty, incompetence and weakness in others. It gives us a language, a theory, and compelling evidence to place Trump’s otherwise bewildering and sometimes terrifying behavior in perspective.”
—Edward R. Shapiro, M.D., Clinical Professor of Psychiatry, Yale Child Study Center, coauthor of Lost in Familiar Places: Creating New Connections between the Individual and Society, Editor of The Inner World in the Outer World: Psychoanalytic Perspectives

Justin A. Frank, M.D. is a former clinical professor of psychiatry at the George Washington University Medical Center and a physician with more than forty years of experience in psychoanalysis. He is a frequent contributor to HuffingtonPost.com and has served as a columnist for Time Inc., DailyBeast.com, and Salon.com. He is also the bestselling author of Bush on the Couch as well as Obama on the Couch.
Loading...
or
Not Currently Available for Direct Purchase