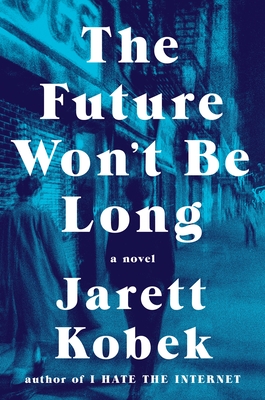 The Future Won't Be Long (Hardcover)

“A brilliant re-creation of a disappeared New York of cheap rents, club kids and Bret Easton Ellis. . . . You can’t stop time’s passage, this absorbing novel reminds us. You can only find someone to love to help you survive it.” —Sam Sacks, The Wall Street Journal

“Have you been pining for tales of drug-fueled big-city debauchery set in the pre-digital era, when MTV was king, people still used landlines and hookups were orchestrated on dance floors instead of dating apps? Look no further.” —The Washington Post

“Hard not to recommend. . . . Full of delightfully cynical aphorisms. . . . At the heart of The Future Won’t Be Long is the friendship between Baby and Adeline—at once loving and destructive and convincingly drawn by Kobek.” —Kevin Nguyen, GQ.com

A euphoric, provocative novel about friendship, sex, art, clubbing, and ambition set in 1980s and ’90s New York City, from the author of I Hate the Internet

When Adeline, a wealthy art student, chances upon a young man from the Midwest known only as Baby in a shady East Village squat, the two begin a fiery friendship that propels them through a decade of New York life. In the apartments and bars of downtown Manhattan to the infamous nightclub The Limelight, Adeline is Baby’s guardian angel, introducing him to a city not yet overrun by gentrification. They live through an era of New York punctuated by the deaths of Warhol, Basquiat, Wojnarowicz, and Tompkins Square Park. Adeline is fiercely protective of Baby, even bringing him home with her to Los Angeles, but he soon takes over his own education. Once just a kid off the bus from Wisconsin, Baby relishes ketamine-fueled clubbing nights and acid days in LA, and he falls deep into the Club Kid twilight zone of sexual excess.

As Adeline develops into the artist she never really expected to become and flees to the nascent tech scene in San Francisco, Baby faces his own desire for artistic expression and recognition. He must write his way out of clubbing life, and their friendship, an alliance that seemed nearly impenetrable, is tested and betrayed, leaving each unmoored as the world around them seems to be unraveling. Riotously funny and wise, The Future Won't Be Long is an ecstatic, propulsive novel coursing with a rare vitality, an elegy to New York and to the relationships that have the power to change—and save—our lives.

Jarett Kobek is a Turkish American writer living in California. He is the author of the novella ATTA (2011) and the novel I Hate the Internet (2016), an international bestseller that has appeared, or is scheduled to appear, in seven languages.

Praise For The Future Won't Be Long: A Novel…

“Brilliant. . . . The chapters, alternating between the perspectives of Baby and Adeline, visit a pornographic movie house on Third Avenue; the Jones Diner, famous for its $1.50 cheeseburger deluxe; the homeless shantytown in Tompkins Square Park; the Tower Records at Broadway and Fourth Street. Baby succumbs to the underworld of nightclubs, becoming a fixture at the Limelight and the Palladium and ingesting every fashionable drug that ever made the rounds in Manhattan. Eighties ‘nihilit’ phenom Bret Easton Ellis is duly brought on for a cameo and ruthlessly mocked, as is Brooklyn Heights poohbah Norman Mailer. Writing with encyclopedic authority and striking equilibrium, Mr. Kobek punctures the glamour of these cultural signifiers by threading his narrative with grisly real-life crimes. . . . But there’s one other constant in the novel, and that’s the friendship that Baby and Adeline sustain through their succession of boyfriends and jobs and mental breakdowns. Mr. Kobek sensitively traces the convoluted paths they take toward forging their careers. . . . You can’t stop time’s passage, this absorbing novel reminds us. You can only find someone to love to help you survive it.”
—Sam Sacks, The Wall Street Journal

“Have you been pining for tales of drug-fueled big-city debauchery set in the pre-digital era, when MTV was king, people still used landlines and hookups were orchestrated on dance floors instead of dating apps? Look no further.”
—The Washington Post

“Intensely readable: the dialogue is snappy, the barrage of opinions bracing, so that 10 years and 400 pages whizz by . . . compellingly vivid.”
—The Financial Times

“An inspired evocation of the last days of the underground empire, before the fall.”
—Chris Kraus

“Hard not to recommend. . . . Full of delightfully cynical aphorisms. . . . At the heart of The Future Won’t Be Long is the friendship between Baby and Adeline—at once loving and destructive and convincingly drawn by Kobek.”
—Kevin Nguyen, GQ.com

“Kobek follows his brilliant 2016 book, I Hate the Internet with a hilarious novel set in the 1980s and ’90s New York City art scene. It follows Adeline (a rich art student) and Baby (a Midwest expat) over their decade of friendship. Kobek’s writing is a dryly ironic cocktail of observations about sex, tech, friendship and other absurdities of modern life. He’s not for everyone. But if he is for you, he’ll be one of your favorite authors.”
—The Omaha World-Herald

“One of the best New York City novels I have read, a wise and funny book that captures the city from the mid-'80s to mid-'90s.”
—Largehearted Boy

“A swirling, name-dropping, drug-fueled, hypersaturated whirlwind of a novel set against the New York City of the 1980s and '90s, Kobek’s latest is a gritty coming-of-age story with quiet heart. . . . An ode to a city—and an era—long gone.”
—Kirkus Reviews

“Set primarily in Manhattan in the tumultuous decade spanning the years 1986 to 1996, the picaresque novel refracts the coming of age of its two main characters through their alternating narrative viewpoints and the events and personalities that defined the city at that time. . . . Kobek (I Hate the Internet) has a great eye for detail, and his descriptions of his characters’ peregrinations through New York’s neighborhoods and nightlife read with the authenticity of genuine experience. Punctuated with gentle humor and awash with genuine fondness for its characters, this novel breezes giddily through the disorder and shifting landscape of their lives, bearing out Baby’s contention that ‘Good or ill, there’s always change coming.’”
—Publishers Weekly

“Jarett Kobek’s druggy, sexy, filthy fictional tour of New York City at the twilight of the 20th century is a nostalgic prequel to his gale-force satire I Hate The Internet, one of last year’s best novels . . . this wonderful novel shows Kobek can do old-school plot without dialling down the fizzing voltage of his distinctively ranty style.”
—Metro (UK)

“This is New York in the late 80s and early 90s: a city of club kids, drag queens, artists and junkies; the urban laboratory where identities are being reinvented for the new millennium . . . a novel that not only dissects with consummate skill the cultural life of fin-de-siècle New York, but finds there the early symptoms of our contemporary malignancy.”
—The Observer (UK)

“The Future Won’t Be Long arrives with the lightning strike clarity that usually comes on the dance floor at 4am when the chaos of the world makes beautiful and profound sense. Kobek brilliantly gathers the best and worst of club land, the grit and grime of the East Village and the art and aspirations of its inhabitants and delivers a novel so evocative of time and place that you’ll be pretty certain you were there.”
—Ivy Pochoda, author of Visitation Street

“Aggressively unconventional in form . . . winningly camp . . . one can’t help liking Kobek for writing it; for so defiantly, brattishly, entertainingly, being a not-good novelist.”
—The Guardian

“New York, like the future, isn’t what it used to be—which is why Jarett Kobek lives in California and writes like a dream. His new novel is a marvel of wit, grit, and deep city memory—perfect for any reader in search of a Horatio Alger into toilet sex and ketamine.”
—Joshua Cohen, author of The Book of Numbers and Moving Kings

“A festival of wit and, finally, wisdom”
—The Spectator (UK)

“The Great New York City Novel has been loudly attempted and proclaimed so many times, one is tempted to assume it simply couldn’t exist. Yet, with piercing intelligence, vitality, hilarity, and a rather startling sweetness, Jarett Kobek has done it. The Future Won’t Be Long is staggering, exhilarating, and the single best portrait of Lower Manhattan achieved since American Psycho.”
—Matthew Specktor, author of American Dream Machine

Praise for Jarett Kobek’s I Hate the Internet

“A grainy political and cultural rant, a sustained shriek about power and morality in a new global era. It’s a glimpse at a lively mind at full boil. . . . [An] entertaining novel of ideas . . . This book has soul as well as nerve. It suggests that, as the author writes, ‘the whole world was on a script of loss and people only received their pages moments before they read their lines.’”
—Dwight Garner, The New York Times

“I just got an early copy of [Kobek’s] newest, I Hate the Internet, and devoured it—he’s as riotous as Houellebecq, and you don’t need a translator, only fireproof gloves for turning the pages.”
—Jonathan Lethem, The Scofield

“This is a relentless, cruel, hilariously inflamed satire of a loop of economic mystification and the reemergence of the credibility of the notion of Original Sin in the technological utopia of the present-day Bay Area and the world being remade in its image.”
—Greil Marcus, Pitchfork
or
Not Currently Available for Direct Purchase
Copyright © 2020 American Booksellers Association