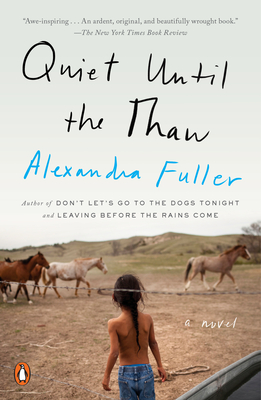 Quiet Until the Thaw

The debut novel from the bestselling author of Don't Let's Go to the Dogs Tonight and Leaving Before the Rains Come.

Two Native American cousins, Rick Overlooking Horse and You Choose Watson, are pitted against each other as their tribe is torn apart by infighting. Rick chooses the path of peace and stays; You Choose, violent and unpredictable, strikes out on his own. When he returns, after three decades behind bars, he disrupts the fragile peace and threatens the lives of the entire reservation.

A complex tale that spans generations and geography, Quiet Until the Thaw conjures, with the implications of an oppressed history, how we are bound not just to immediate family but to all who have come before and will come after us, and, most of all, to the notion that everything was always, and is always, connected.

Praise For Quiet Until the Thaw: A Novel…

“Fuller achieves what every creative writer with political and social concerns hopes to achieve, where the political issues of her text do not overwhelm her story with a heavy hand, and yet they are simultaneously a part of the visible and invisible forces at work on the characters’ journeys. And what journeys they undertake… In telling a story whose form embraces the Lakota Sioux’s philosophies and distinctive life cycles, Quiet Until the Thaw doesn’t just give us an authentic tale of a Native American people’s journey. It offers up a distinctive view of America, and perhaps even pleas for a new understanding of how great American novels can be written.” - Paste Magazine

“Alexandra Fuller’s first novel, “Quiet Until the Thaw,” is a fearless book. . . with trenchant wit and appropriate rage, Fuller dodges cliché. “Quiet Until the Thaw” is not so much a conventional narrative as a progression of vignettes, less a tale to be read than a chronicle to be heard. The voice of the storyteller, Fuller’s voice — by turns acerbic, compassionate and wry — imprints us almost more than the story she tells. And her gaze, though narrowly focused on a handful of Oglala Sioux characters, illuminates much more than their lives. Beyond spanning relatively large swaths of time, the book covers many physical territories as well — from the Rez in South Dakota to Vietnam, from Paris Disneyland to the moon. And in these snippets of cultural conquest, it is as much a history of (white) American capitalism in the 20th century as of a people oppressed by it…An essential book.”— WBUR’s The ARTery

“Alexandra Fuller has always been a brave writer. We count on her bare-boned, carefully-crafted truths laced with wit and wisdom. But in her debut novel, Fuller calls upon her imagination to explore what binds us together rather than what pulls us apart. Quiet Until the Thaw is a literary risk and a revelation.”  —Terry Tempest Williams, author of The Hour of Land

“One moment I am crying in sorrow, the next laughing and on the same page I am cringing. Honest fiction that exposes the reality of the difficulties of the Lakota Way.”
—Richard B. Williams, former president and CEO of the American Indian College Fund, and member of the Oglala Lakota Tribe

“Fuller’s keen sense of engagement with a land ‘to which you now don’t belong,’ and her place as an outsider, make her a sympathetic storyteller. Her prose shimmers and vibrates with life in this excellent novel.” – Publishers Weekly

“Fuller writes unhurriedly and with an economy of expression that is nonetheless evocative... what is explored paints a vivid picture.” - Bookpage

“Fuller’s kinship with Lakota traditions in this novel is palpable.” – Booklist

“A lyrical tale of life on the Rez. . . A tender, wry homage to Native American wisdom and lore.”- Kirkus Reviews

Alexandra Fuller was born in England in 1969. In 1972, she moved with her family to a farm in southern Africa. She lived in Africa until her midtwenties. In 1994, she moved to Wyoming.
Loading...
or support indie stores by buying on
(This book is on backorder)