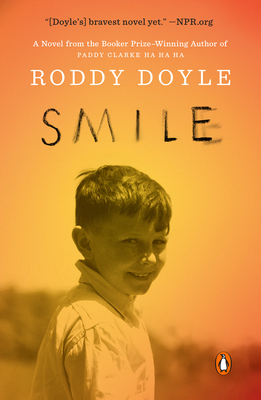 “Roddy Doyle is best known for writing engaging dialogue that permeates the pages of his perfect Irish novels. Smile, his latest novel, is no exception. Except with this work, the playful Irish banter not only serves to transport you to the Irish pubs where recently divorced Victor Forde finds himself confronting his adolescence and current sense of belonging, it also leads you to question everything you just read once you turn the last page.”
— Casey Protti, Bookshop Santa Cruz, Santa Cruz, CA
View the List

From the author of the Booker Prize winning Paddy Clarke Ha Ha Ha, a bold, haunting novel about the uncertainty of memory and how we contend with the past.

Just moved into a new apartment, alone for the first time in years, Victor Forde goes every evening to Donnelly’s for a pint, a slow one. One evening his drink is interrupted. A man in shorts and a pink shirt comes over and sits down. He seems to know Victor’s name and to remember him from secondary school. His name is Fitzpatrick.

Victor dislikes him on sight, dislikes, too, the memories that Fitzpatrick stirs up of five years being taught by the Christian Brothers. He prompts other memories—of Rachel, his beautiful wife who became a celebrity, and of Victor’s own small claim to fame, as the man who would say the unsayable on the radio. But it’s the memories of school, and of one particular brother, that Victor cannot control and which eventually threaten to destroy his sanity.

Smile has all the features for which Roddy Doyle has become famous: the razor-sharp dialogue, the humor, the superb evocation of adolescence, but this is a novel unlike any he has written before. When you finish the last page you will have been challenged to reevaluate everything you think you remember so clearly.

Roddy Doyle was born in Dublin in 1958. He is the author of ten acclaimed novels, including The Commitments, The Van (a finalist for the Booker Prize), Paddy Clark Ha Ha Ha (winner of the Booker Prize), The Woman Who Walked Into Doors, A Star Called Henry, and, most recently, The Guts.  Doyle has also written two collections of stories, and several works for children and young adults.  He lives in Dublin.

Praise For Smile: A Novel…

"Smile is a novel that's as original as it is brutal, and as painful as it is necessary. Doyle asks us not just to consider the ravages of post-traumatic stress, but to feel them, or as closely as we can, anyway. It's his bravest novel yet; it's also, by far, his best." --Michael Schaub, npr.org

“Has anyone written as beautifully as Doyle on how love and violence lean right up against each other in childhood? . . . From the Booker Prize winning Paddy Clarke Ha Ha Ha to Smile, Doyle’s books bruise and cheer at the same time.” –The Boston Globe

“Doyle was determined to write a novel that shocked – and succeeded . . . This is a performance few writers could carry off: a novel constructed entirely from bar stool chatter and scraps of memory. But you can’t turn away." --Ron Charles, The Washington Post

“The closest thing [Doyle’s] written to a psychological thriller . . . showcases his well-loved facility for character and dialogue.  His ear and eye are peerless.” – The New York Times Book Review

“Doyle's finest work since The Woman Who Walked Into Doors, Smile combines tropes from the various strands of Doyle’s career . . . and merges them into a unique novel, one that is terribly moving . . . Like all good literature, [Smile] will inspire debate but also admiration for the courage of a hugely successful writer who refuses to be predictable and uses the novel to challenge both the reader’s sense of ease and the nature of the form itself.”
–The Guardian

“The fear of honest disclosure is central to Mr. Doyle’s newest novel, Smile, about the lies men tell to make themselves appear normal . . . Mr. Doyle’s signature clipped dialogue is still a feature of Smile, but this short, effective novel is about the truths that emerge when, despite himself, Victor lets himself talk.” – The Wall Street Journal

"Another of Doyle's rich and sympathetic character studies." --The New York Review of Books

“[Doyle] employs his sly humor and unparalleled ear for banter between convincingly imperfect characters to craft an unsettling work of psychological suspense . . . [an] artful meditation on pain, memory, and how we build the stories of our lives. It is his most powerful and sobering novel since The Woman Who Walked into Doors.” – The Seattle Times

“Beautifully written, and beautifully observed . . . Reading Smile, one is swept along – as in all Doyle’s novels – by the vibrancy of language, the vivid sense of character and place, but nothing prepares you for the final few pages where, in a twist of imaginative brilliance, everything you have read is turned completely on its head.” – The Daily Telegraph

“Mesmerizing . . . akin to The Woman Who Walked Into Doors, but, to my taste, much better:  deeper, more psychologically astute, more gut-wrenchingly powerful.” – The Minneapolis Star Tribune

“Smile is no easy maneuver: tackling a sensitive subject with the grace and gravity it deserves, and freshly delivering what readers expect in Doyle’s fiction (wit, dialogue, and the accuracy of youth). That Doyle is also, 30 years in, inventing new ways of storytelling is brave and notable.” – St. Louis Post Dispatch

“[A] marvelous novel from this Irish master . . . in a novel that hinges on the fallibility of memory, a narrator’s misremembering of a crucial point is expected.  What is unexpected it quite how far Doyle takes this . . . It says a lot about Doyle’s power that he is able to create such an intensely moving book that yet drops so much of itself as it approaches its end.” – The Spectator

“Doyle’s command of voice is absolutely sure, his dialogue authentic and the Ireland his characters inhabit – still a patchwork of fifties pietism and noughties cosmopolitanism – completely available to his and the reader’s understanding . . . an absorbing and expertly told story.” – Financial Times

“A thrilling, dark, yet often humorous, story about reconciling with one’s past.” -- Buzzfeed

“The first-person narrative is fresh and bracing from Page 1 . . . It isn't until the final pages that the reader understands just what Doyle has done, and it might take a rereading to appreciate just how well he has done it. The understatement of the narrative makes the climax all the more devastating.” – Kirkus Reviews (starred)

“Doyle flavors a compelling character study with a soupçon of suspense, misdirecting readers for a powerful purpose that is only revealed at the shocking, emotionally charged ending.” – ALA Booklist

“[Doyle’s] masterly language and honesty. . . [and] ability to convey so much meaning through rapid-fire dialog in the Irish vernacular is unsurpassed. . . Readers anticipating Doyle’s trademark wit and warmth will instead encounter a psychological mystery with an enigmatic ending that will have them flipping to the beginning looking for clues.” —Library Journal

Praise for the work of Roddy Doyle:

“There is not a writer currently working in the English language who can match Doyle for the fluency with which he tacks back and forth between the hilarious and the heartbreaking.”
—The New York Times Book Review

“One of the delights of Doyle’s work is its fearlessness. . . . In book after book he throws himself into the voices and hearts of his characters.”
—The New York Times Book Review

“No writer alive gives the utterly prosaic thoughts and routines of endless, uneventful days the rhythm and flavor of art better than Doyle.”
—The Philadelphia Inquirer
or support indie stores by buying on
Copyright © 2020 American Booksellers Association