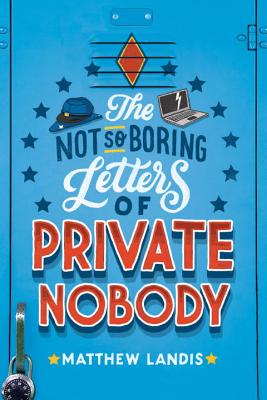 The Not So Boring Letters of Private Nobody

Twelve-year-old Oliver Prichard is obsessed with the Civil War. He knows everything about it: the battles, the generals, every movement of the Union and Confederate Armies. So when the last assignment of seventh-grade history is a project on the Civil War, Oliver is over the moon--until he's partnered with Ella Berry, the slacker girl with the messy hair who does nothing but stare out the window. And when Oliver finds out they have to research a random soldier named Private Raymond Stone who didn't even fight in any battles before dying of some boring disease, Oliver knows he's doomed.

But Ella turns out to be very different from what Oliver expected. As the partners film their documentary about Private Stone--with Oliver's friend Kevin signing on as their head writing consultant--Oliver discovers that sometimes the most interesting things are hiding in uninteresting places. Even Private Stone is better than expected: There's a mystery buried in his past, and Oliver knows he can figure it out.

Praise For The Not So Boring Letters of Private Nobody…

Praise for The Not-So-Boring Letters of Private Nobody

“A couple of tech savvy seventh-graders that readers will love getting to know go digging for a civil war soldier with a secret and discover themselves. Matthew Landis’s novel is the best kind of time travel as past and present cross-dissolve.” —Richard Peck, Newbery Medal-winning author of A Year Down Yonder

“Matthew Landis depicts the world of middle school with laser-like clarity, big-hearted warmth, and abundant humor, while also managing to bring Civil War history vividly to life.  There’s even a little romance thrown in!  I wish I were still teaching just so I could hand this book to my favorite students." —Jordan Sonnenblick, award-winning author of Drums, Girls, and Dangerous Pie

“For seventh-grader Oliver, nothing’s fair when it comes to war, first love, or group projects. . . . Teacher Landis knows how middle schoolers work, and he shows his skill here.” —Kirkus Reviews

“Landis challenges readers to see history as more than ‘endless battles, dates, and generals.’ Each setting (school, homes, historical societies, reenactment practice field, and Gettysburg) adds another dimension to the characters and issues in this appealing novel.” —Booklist

“The story’s pace and romantic tension build as the students gel as a team, research primary sources, and create a documentary. The mystery they solve about Private Stone offers tension and interest, but it’s the chemistry between these two characters that is the real star.” —Publishers Weekly

"Oliver makes major missteps in navigating both the project and his “more than friends” interest in Ella, but with the help of his enthusiastic history teacher, Oliver reaches a more nuanced understanding of the Civil War and of his first crush." —School Library Journal

“A well spun plot with quick-fire dialogue. Civil War buffs might learn a thing or two from the notes, and school story fans will be thoroughly entertained.” —BCCB

Matthew Landis slays boredom wherever it lurks in his eighth-grade social studies classroom. He lives in Doylestown, PA, with his wife and four kids, some chickens, and a boxer that acts much like the forgotten eldest child.
Loading...
or
Not Currently Available for Direct Purchase