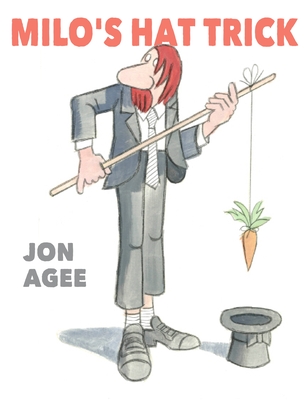 Milo the Magnificent's magic act isn't so magnificent after all, until he meets a bear who teaches him the secret to the perfect hat trick in this classic and critically acclaimed picture book, perfect for fans of Oliver Jeffers and Jon Klassen

Milo the Magnificent is the world’s least magnificent magician. He can't even pull a rabbit out of his hat! When Mr. Popovich gives him one more chance, Milo knows he has no choice: he has to go out and catch a rabbit for his act. Instead, he catches a bear. And the bear promises to help! Into the hat he dives. Milo rides the train home, sure his act will go off perfectly tonight. But when he arrives in his dressing room, he discovers that he left his hat—and the bear!—on the train. Meanwhile, across town, a man in a restaurant has a very familiar hat . . . Can Milo get his hat back in time for his act?

Jon Agee is the author/illustrator of many acclaimed books for children, including the Boston Globe–Horn Book Honor Winner It's Only Stanley and the ALA Notable Books Little Santa, Terrific, Milo's Hat Trick, and The Incredible Painting of Felix Clousseau, and a series of popular wordplay books including the IRA-CBC Children's Choice book of palindromes, Go Hang a Salami! I'm a Lasagna Hog! Jon grew up along the Hudson River in Nyack, New York, and went to college at The Cooper Union School of Art in New York City, where he studied painting and filmmaking. Now a full-time author, he lives in San Francisco with his wife, Audrey.

* "With marvelously economical narration and line drawings, Agee conjures a formidable tale of a struggling musician. . . . Agee's plot twists are as surprising as, well, pulling a bear out of a hat." –Publishers Weekly, starred review
or
Buy Here
Copyright © 2020 American Booksellers Association