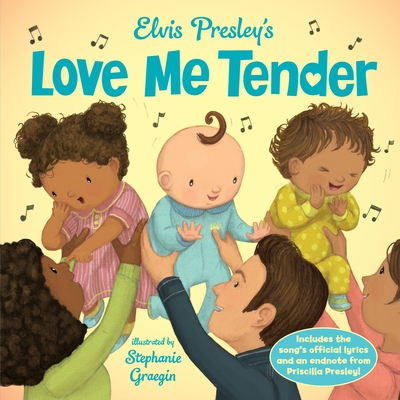 Adapted from the unforgettable classic song, Elvis Presley's Love MeTender is a heartwarming ode to the special bond between children and the adults who love and care for them--be they parents, grandparents, adoptive parents, aunts, uncles, or guardians. With its simple, timeless message, Elvis Presley's Love Me Tender is destined to join Guess How Much I Love You as a baby shower staple.  And the sweet, inclusive illustrations make it a book every family will treasure "all through the years, 'till the end of time."

Elvis Presley was an internationally recognized and beloved singer and performer during the 1950s, '60s, and '70s. Over the course of his career, Elvis was nominated for 14 Grammys (3 wins) and sold over a billion records world-wide, more than any other artist. At the age of 36, Elvis received the Grammy Lifetime Achievement Award, and in 1970 he was named One of the Ten Outstanding Young Men of the Nation by the United States Jaycees. In addition to his musical accolades, Elvis also starred in 33 films and made numerous television appearances. Elvis died at his home in Memphis on August 16, 1977.  Today, he is regarded as the king of rock-and-roll and one of the most influential pop culture figures of the 20th century.

Stephanie Graegin spent her childhood drawing and collecting fauna in Fort Wayne, Indiana and Houston, Texas. She received her BFA in Fine Arts from the Maryland Institute College of Art and her MFA in Printmaking from the Pratt Institute. Stephanie now lives in Brooklyn, is still drawing, and has managed to keep her collection down to one orange cat.
Loading...
or support indie stores by buying on