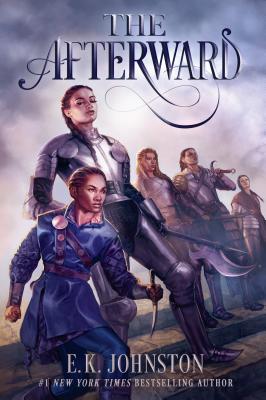 "I love this book so very much. It's an epic quest, with female knights and female camaraderie and companionship. I so love how E. K. Johnston took all the epic's tropes, then not so much subverted them as reinvented them in her own female-centric image."—Robin LaFevers, New York Times bestselling author of the His Fair Assassin trilogy

"Delicately wrought politics, women in all kinds of roles, and a queer love story. I absolutely loved The Afterward."--Samantha Shannon, New York Times bestselling author of The Bone Season and The Priory of The Orange Tree

"The Afterward is a beautifully tender romance woven deftly into a compelling adventure. Or maybe it's a commanding adventure braided neatly into an irresistible romance? Either way, E. K. Johnston has written yet another gorgeous, thoughtful book that I could have kept reading forever."—Sarah Gailey, Hugo award winning author

"A dream come true for teens who love fantasy but never got to see queer representation in those traditionally cis-het-normative worlds. Pick this book up and let it take you on a wonderful, magical, queer adventure!"--ALA Rainbow List

"This is a tremendously accomplished novel. I admire it for its craft as well as loving it for what it made me feel. I recommend it wholeheartedly. Go and read it. Now."—Tor.com

"[E]verything I’d been hoping and expecting from a queer novel."—Hypable

"By the time I turned to the last page, I was basking in that warm, tingly glow of having spent worthwhile time with some great new friends."—Forever Young Adult

E. K. Johnston is the #1 New York Times bestselling author of several YA novels, including the L.A. Times Book Prize finalist The Story of Owen and Star Wars: Ahsoka. Her novel A Thousand Nights was shortlisted for the Governor General's Award. The New York Times called The Story of Owen "a clever first step in the career of a novelist who, like her troubadour heroine, has many more songs to sing" and in its review of Exit, Pursued by a Bear, The Globe & Mail called Johnston "the Meryl Streep of YA," with "limitless range." E. K. Johnston lives in Stratford, Ontario. Follow her on Twitter at @ek_johnston
Loading...
or
Not Currently Available for Direct Purchase