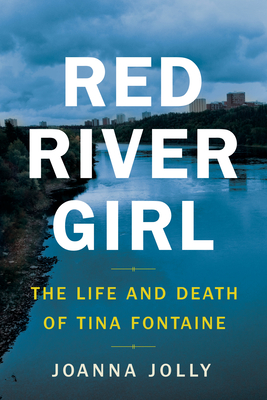 The Life and Death of Tina Fontaine

A gripping account of the unsolved death of an Indigenous teenager, and the detective determined to find her killer, set against the backdrop of a troubled city.

On August 17, 2014, the body of fifteen-year old runaway Tina Fontaine was found in Winnipeg's Red River. It was wrapped in material and weighted down with rocks. Red River Girl is a gripping account of that murder investigation and the unusual police detective who pursued the killer with every legal means at his disposal. The book, like the movie Spotlight, will chronicle the behind-the-scenes stages of a lengthy and meticulously planned investigation. It reveals characters and social tensions that bring vivid life to a story that made national headlines.

Award-winning BBC reporter and documentary maker Joanna Jolly delves into the troubled life of Tina Fontaine, the half-Ojibway, half-Cree murder victim, starting with her childhood on the Sagkeeng First Nation Reserve. Tina's journey to the capital city is a harrowing one, culminating in drug abuse, sexual exploitation, and death.

Aware of the reality of missing and murdered Indigenous women and girls, Jolly has chronicled Tina Fontaine's life as a reminder that she was more than a statistic. Raised by her father, and then by her great-aunt, Tina was a good student. But the violent death of her father hit Tina hard. She ran away, was found and put into the care of Child and Family Services, which she also sought to escape from. That choice left her in danger.

Red River Girl focuses not on the grisly event itself, but on the efforts to seek justice. In December 2015, the police charged Raymond Cormier, a drifter, with second-degree murder. Jolly's book will cover the trial, which resulted in an acquittal. The verdict caused dismay across the country.

The book is not only a true crime story, but a portrait of a community where Indigenous women are disproportionately more likely to be hurt or killed. Jolly asks questions about how Indigenous women, sex workers, community leaders, and activists are fighting back to protect themselves and change perceptions. Most importantly, the book will chronicle whether Tina's family will find justice.

JOANNA JOLLY is an award-winning BBC reporter based in London. She began her journalism career at the Japanese newspaper Sankei Shimbun, moving on from there to freelance in India and Australia before covering the fight for independence in East Timor. During the past decade, she's worked as a BBC producer and reporter in Jerusalem, South Africa, Brussels, Washington, and India as well as spending two years as the BBC correspondent in Kathmandu, Nepal. During that time Jolly specialised in stories of sexual violence against women. Jolly has won several awards, including the 2007 BBC Onassis Bursary. In 2015, she won the Association of International Broadcaster's best current affairs documentary award for her in-depth look at the prosecution of rape in India. Red River Girl is her first book.

Praise For Red River Girl: The Life and Death of Tina Fontaine…

“Tina Fontaine brought international attention to the tragedy of missing and murdered Indigenous women, girls, and two-spirit folks. This retelling of her life and the investigation into her death is a breathtaking account of the fight to find justice for Tina.”
—Wab Kinew, Leader of the Manitoba NDP and author of The Reason You Walk
or support indie stores by buying on
Copyright © 2020 American Booksellers Association