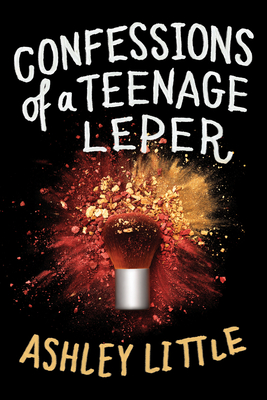 Confessions of a Teenage Leper

Cheerleading, mean girls, shopping . . . and leprosy? High school is about to get complicated. For fans of Before I Fall and Exit, Pursued By a Bear.

Abby Furlowe has plans. Big plans. She's hot, she's popular, she's a cheerleader and she's going to break out of her small Texas town and make it big. Fame and fortune, adoration and accolades. It'll all be hers.

But then she notices some spots on her skin. She writes them off as a rash, but things only get worse. She's tired all the time, her hands and feet are numb and her face starts to look like day-old pizza. By the time her seventeenth birthday rolls around, she's tried every cream and medication the doctors have thrown at her, but nothing works. When she falls doing a routine cheerleading stunt and slips into a coma, her mystery illness goes into overdrive and finally gets diagnosed: Hansen's Disease, aka leprosy.

Abby is sent to a facility to recover and deal with this new reality. Her many misdiagnoses mean that some permanent damage has been done, and all of her plans suddenly come tumbling down. If she can't even wear high heels anymore, what is the point of living? Cheerleading is out the window, and she might not even make it to prom. PROM!

But it's during this recovery that Abby has to learn to live with something even more difficult than Hansen's Disease. She's becoming aware of who she really was before and what her behavior was doing to others; now she's on the other side of the fence looking in, and she doesn't like what she sees. . .

Darkly comic but ultimately touching, Confessions of a Teenage Leper is an ugly duckling tale with a surprising twist.

Praise For Confessions of a Teenage Leper…

PRAISE FOR Confessions of a Teenage Leper:

“Ashley Little has combined an uncommon aspect of modern-day medicine with the common challenge for teens of realizing what is truly of value in life.” --Resource Links

“Little handles [Abby’s journey] with a realistic candour and narrative ease, skilfully rendering Abby at every stage of her journey.” --Quill & Quire

“The novel will provide teen readers with meaningful questions about the true meaning of beauty.” --CM Magazine

“Ashley Little gives us a protagonist who is far from perfect, but sheds light on one’s ability to learn acceptance no matter what their past.” --Canadian Children’s Book News

ASHLEY LITTLE received a BFA in Creative Writing and Film Studies from the University of Victoria and an MFA in Creative Writing from the University of British Columbia. Her book The New Normal won the Sheila A. Egoff Children’s Literature Prize, and Anatomy of a Girl Gang won the Ethel Wilson Fiction Prize, was a finalist for the City of Vancouver Book Award, longlisted for the International IMPAC Dublin Literary Award and has been optioned for television. Confessions of a Teenage Leper is Ashley's fifth novel. Ashley lives in British Columbia with her partner, their daughter, and her toy poodle, Huxley.
Loading...
or support indie stores by buying on