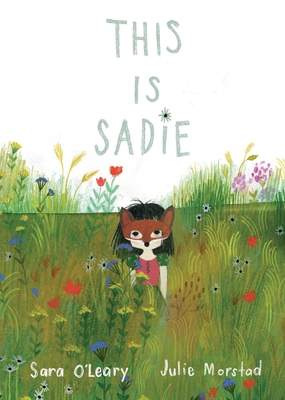 Now in board book, the beloved story about a little girl with a big imagination from the award-winning team of Sara O'Leary and Julie Morstad.

Sadie is a little girl with a big imagination. She has been a girl who lived under
the sea and a boy raised by wolves. She has had adventures in wonderland and
visited the world of fairytales. She whispers to the dresses in her closet and talks
to birds in the treetops. She has wings that take her anywhere she wants to go, but
that always bring her home again. She likes to make things -- boats out of boxes
and castles out of cushions. But more than anything Sadie likes stories, because
you can make them from nothing at all. For Sadie, the world is so full of wonderful
possibilities . . . This is Sadie, and this is her story.

SARA O'LEARY is a writer of fiction for both adults and children. She is the author of the award-winning series of Henry books: When You Were Small, Where You Came From and When I Was Small, all illustrated by Julie Morstad. A graduate of the UBC Creative Writing Program, she has taught screenwriting and writing for children at Concordia University in Montreal. Sara was named for a grandmother who was called Sadie all her life. She is happy to have a child to name after her.

JULIE MORSTAD is an author, illustrator and artist living in Vancouver, BC. Her book How To marked her authorial debut, and received starred reviews in Kirkus, School Library Journal and Quill & Quire, was a Governor General's Award nominee, and won the Marilyn Baillie Picture Book Award. She is also the illustrator of When You Were Small, recipient of the Marilyn Baillie Picture Book Award; When I Was Small, winner of the Christie Harris Illustrated Children's Literature Prize; Swan: The Life and Dance of Anna Pavlova; Today; and When Green Becomes Tomatoes, which has recieved numerous starred reviews.
Loading...
or support indie stores by buying on