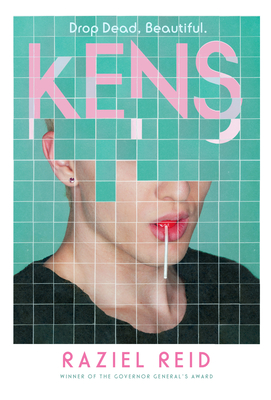 Heterosexuality is so last season: Kens is the gay Heathers meets Mean Girls, a shocking parody for a whole new generation.

Every high school has the archetypical Queen B and her minions. In Kens, the high school hierarchy has been reimagined. Willows High is led by Ken Hilton, and he makes Regina George from Mean Girls look like a saint. Ken Hilton rules Willows High with his carbon-copies, Ken Roberts and Ken Carson, standing next to his throne. It can be hard to tell the Kens apart. There are minor differences in each edition, but all Kens are created from the same mold, straight out of Satan's doll factory. Soul sold separately.
Tommy Rawlins can't help but compare himself to these shimmering images of perfection that glide through the halls. He's desperate to fit in, but in a school where the Kens are queens who are treated like Queens, Tommy is the uncool gay kid. A once-in-a-lifetime chance at becoming a Ken changes everything for Tommy, just as his eye is caught by the tall, dark, handsome new boy, Blaine. Has Blaine arrived in time to save him from the Kens? Tommy has high hopes for their future together, but when their shared desire to overthrow Ken Hilton takes a shocking turn, Tommy must decide how willing he is to reinvent himself -- inside and out. Is this new version of Tommy everything he's always wanted to be, or has he become an unknowing and submissive puppet in a sadistic plan?

“[A] more complex work, satirising the experience of gay teenagers as well as portraying it sympathetically.” --Economist 1843

"Kens is certainly an intriguing sophomore novel that will spark much discussion among young readers, critics, and academics alike. Fans of Mean Girls and Heathers will find a lot to love here. . . . Recommended." --CM Magazine

“The novel’s critique of societal obsessions with media and self-image, combined with its brilliant takedown of queer culture’s “alpha gays,” makes it a worthwhile read.” --Kirkus Reviews

“Raising issues while raising eyebrows, Kens comes to life in this space between the terrible and the beautiful, and asks: if both are fascinating, how can we tell the difference between them?” --Quill & Quire

“[A] brilliant satire of today’s social media-obsessed youth. And it is edgier, bolder and funnier than almost anything out there in the current young-adult market. . . . Kens may be the perfect gift for gay teenagers, especially those who don't take themselves too seriously.” --Winnipeg Free Press

RAZIEL REID's debut young adult novel, When Everything Feels Like the Movies, won the 2014 Governor General's Award for English-language children's literature, making him, at 24 years old, the youngest ever person to win the prestigious award. When Everything Feels Like the Movies, optioned for film by Random Bench Productions, is inspired in part by the 2008 murder of gay teenager Lawrence Fobes King. Published in 2014 by Arsenal Pulp Press, it has since been published in the UK by Atom Publishing with The Telegraph listing it as one of the best YA novels of 2016, and in Germany by Albino Verlag. It was selected for inclusion in the 2015 edition of Canada Reads, where it came in second place. It was also nominated for a Lambda Literary Award for LGBT Children's/Young Adult Literature, and for Publishing Triangle's Ferro-Grumley Award. Raziel lives in Vancouver and is a professor of Creative Writing for Children and Young Adults at the University of British Columbia.
Loading...
or
Not Currently Available for Direct Purchase