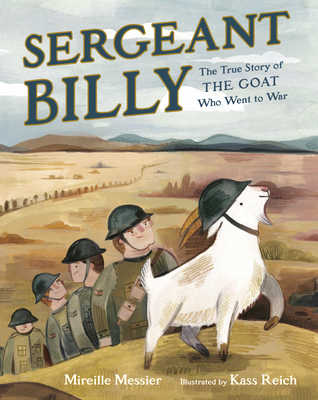 The True Story of the Goat Who Went to War

A delightful tale inspired by the true story of a brave goat war hero. Perfect for fans of Finding Winnie and Rescue and Jessica.

During World War I, a goat named Billy was adopted by a platoon of soldiers and made his way across the ocean to be part of the war effort.

Billy . . .
•   Trained with the soldiers
•   Was smuggled across the ocean
•   Got snuck into the frontlines in a box of oranges
•   Ate some secret documents and was arrested for treason
•   Got trench foot
•   Head-butted soldiers into a trench and saved them from a shell
•   Came back home a decorated war hero

This charming true story follows Sergeant Billy from his small prairie town to the trenches of World War I and back, through harrowing moments, sad moments, moments of camaraderie and moments of celebration. This unforgettable goat and the platoon that loved him will capture your heart!

Praise For Sergeant Billy: The True Story of the Goat Who Went to War…

“Messier takes young readers beyond the mud and blood of World War I with her rollicking humanizing tale of a goat and the soldiers who cared for it. Illustrator Kass Reich expertly captures the tone of Messier’s words with her delightful illustrations. . . . Highly recommended.” --CM Magazine

"“Humanizes the realities of war.” --CityParent

MIREILLE MESSIER is a Montreal-born, Ottawa-raised and now Toronto-based author, freelance writer and voice-over artist. She has published over twenty children's books--including The Branch, which was nominated for a Governor General's Award--several articles for youth magazines and has collaborated in the production of many family programs and interactive apps for CBC, TVO/TFO and Teletoon. Mireille enjoys reading graphic novels, swing music and, of course, goats.

KASS REICH was born in Montreal, Quebec. She works as an artist and educator and has spent the majority of the last decade traveling and living abroad. She now finds herself back in Canada, but this time in Toronto. Kass loves illustrating books for all ages, including Megabat, Carson Crosses Canada, Hamsters Holding Hands and Dr. Coo and the Pigeon Protest. This is her first book about a goat.
Loading...
or support indie stores by buying on