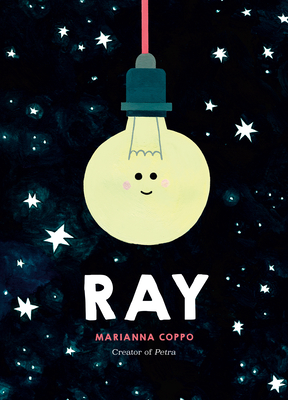 A humorous picture book about the adventures of a light bulb who embarks on an enlightening journey, from the acclaimed author-illustrator of Petra.

At the end of the hall, near the staircase, is a closet. In that closet lives Ray, who is a light bulb. Ray spends most of his time in darkness, which is pretty boring if you don't know how to fill it. So boring that Ray usually slips into a dreamless sleep . . .

Everything changes one day when Ray is migrated into a portable lantern and taken on the trip of a lifetime. He wakes up in a much larger closet (the outside), surrounded by incredible things - too many to count! Everything is super big, and Ray has never felt so small. And in the morning, Ray makes an incredible discovery which will change his life forever.

Meet Ray, a charming new character from the imaginative mind of Marianna Coppo, the creator of Petra!

"Ray is an unexpected, endearing hero who shines brightly in this tale." --STARRED REVIEW, Booklist

“Coppo has returned with another lovable new character in Ray, who reminds readers that all it takes is a little change in perspective to open up a whole new world.” --STARRED REVIEW, School Library Journal

MARIANNA COPPO is an author/illustrator from Italy. She studied editorial illustration at MiMaster in Milan, and now focuses on freelance illustration in Rome. She is one of the curators of Tentacoli, an independent label which specializes in fanzines and handmade products. Her debut picture book, Petra, was released to great acclaim, and received three starred reviews from prominent publications. A Very Late Story is her latest book.
Loading...
or support indie stores by buying on