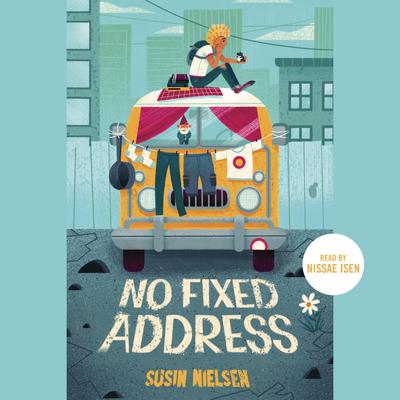 From beloved Governor General Literary Award--winning author Susin Nielsen comes a touching and funny middle-grade story about family, friendship and growing up when you're one step away from homelessness.

Felix Knuttson, twelve, is an endearing kid with an incredible brain for trivia. His mom Astrid is loving but unreliable; she can't hold onto a job, or a home. When they lose their apartment in Vancouver, they move into a camper van, just for August, till Astrid finds a job. September comes, they're still in the van; Felix must keep "home" a secret and give a fake address in order to enroll in school. Luckily, he finds true friends. As the weeks pass and life becomes grim, he struggles not to let anyone know how precarious his situation is. When he gets to compete on a national quiz show, Felix is determined to win -- the cash prize will bring them a home. Their luck is about to change! But what happens is not at all what Felix expected.

"This is the first day I've written in a diary. The reason I am, is 'cos I love writing stories, and if I do grow up to be a famous writer, and later die, and they want to get a story of my life, I guess I should keep a diary." Nielsen wrote this poorly constructed sentence when she was eleven. And while she isn't exactly famous, she did predict her future. She got her start writing for the hit TV series Degrassi Junior High and went on to write for more than twenty Canadian shows. Susin is the author of five critically acclaimed and award-winning titles, including Optimists Die First, We Are All Made of Molecules, and The Reluctant Journal of Henry K. Larsen.

Nielsen lives in Vancouver with her family and two naughty cats.


NISSAE ISEN has been in the voiceover industry since the tender age of 7 when she played ‘George’, Miss BG’s very precocious baby brother. One of five children, Nissae maintains regular work in the entertainment business while studying very hard with the help of her cat Kovu to complete her university degree in nursing in her hometown of Toronto. Having appeared in over 20+ animated projects, a couple notable leads include ‘Yuri’ in My Big Big Friend’ and ‘Kody’ in ‘Kody Kapow.’ Yes, a lot of male roles, and yes, Nissae is a woman!