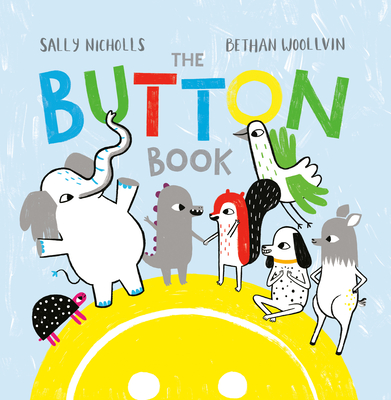 Here's a button. I wonder what happens when you press it?

Follow a group of animal friends as they discover a collection of mysterious buttons, all of which do different things!

From a blue singing button to a purple tickle button, from a rude sound button to a mysterious white button, there's only one way to find out what they do: press them all! And thankfully, there's even a sleeping button to lull the animals to sleep after a busy day.

A lively introduction to colors and shapes, The Button Book is the perfect interactive book for storytime (and bedtime!).

SALLY NICHOLLS grew up in Stockton-on-Tees, and after school, travelled the world, working for a period at a Red Cross hospital in Japan. Sally's first novel, Ways to Live Forever, won the Waterstones Children's Book Prize and she has been shortlisted for the Guardian Children's Fiction Prize and the Costa Children's Book Award. She lives in Oxford.

BETHAN WOOLLVIN won the Macmillan Prize for Illustration in 2014 for her retelling of "Little Red Riding Hood," Little Red, which was later named a New York Times Best Illustrated Children's Books of 2016. In 2017, Bethan was awarded the New Talent (Children's Books) Prize at the World Illustration Awards. She was also shortlisted for the 2017 Klaus Flugge Prize and the Little Rebels Children's Book Award. Bethan graduated from Anglia Ruskin University in Cambridge with a First Class Degree in Illustration in 2015 and now lives in Brighton, England.

Praise For The Button Book…

One of The Guardian's Best Children's Books of 2019

PRAISE FOR The Button Book:

“British writer Nicholls’ simple, silly narrative and Woollvin’s colorfully childlike illustrations result in a fun picture book that incorporates shapes and colors and that can be used at home and in libraries and classrooms. . . . [The book] should have readers and caregivers singing, clapping, and bouncing along.” --Kirkus Reviews
or
Buy Here
Copyright © 2020 American Booksellers Association