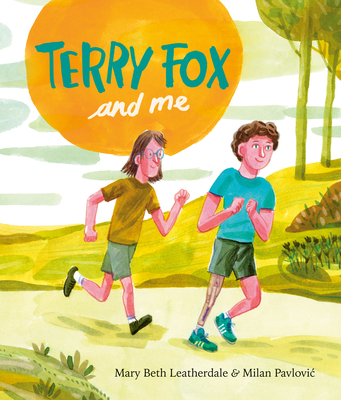 Terry Fox and Me

Celebrating the 40th anniversary of the Terry Fox Marathon of Hope, this picture book biography tells the story of a friendship defined by strength and love.

Before Terry Fox become a national hero and icon, he was just a regular kid. But even then, his characteristic strength, determination and loyalty were apparent and were the foundation for his friendship with Doug. The two first met at basketball tryouts in grammar school. Terry was the smallest - and worst - basketball player on the court. But that didn't stop him. With Doug's help, Terry practiced and practiced until he earned a spot on the team. As they grew up, the best friends supported each other, challenged each other, helped each other become better athletes and better people. Doug was by Terry's side every step of the way: when Terry received a diagnosis of cancer in his leg, when he was learning to walk - then run - with a prosthetic leg and while he was training for the race of his life, his Marathon of Hope.

Written from Doug's perspective, this story shows that Terry Fox's legacy goes beyond the physical and individual accomplishments of a disabled athlete and honors the true value of friendship.

Praise For Terry Fox and Me…

One of the Ontario Library Association's 2020 Best Bets selection, Junior Non-Fiction category
A 2021 Bank Sreet Book of the Year

MARY BETH LEATHERDALE writes, edits and consults on books, magazines and digital resources for children and youth. She is the editor of Stormy Seas: Stories of Young Boat Refugees, a Quill & Quire Book of the Year, a Booklist Editor's Choice, and a Silver Birch Award, Honor Book among other honors. Recently, Mary Beth co-edited #NotYourPrincess: Voices of Native American Women, an anthology that showcases the strength, diversity, and talent of Indigenous girls and women across North America. Among other honours, it received the American Indian Library Associations' Youth Literature Award, was honoured as an Amelia Bloomer Project List Top Ten title, named a Book of the Year by Quill & Quire, an Excellence in Non-fiction for Young People Finalist, YALSA and a Indigenous Literature Finalist, First Nations Communities READ.

MILAN PAVLOVIC is an illustrator and graphic artist whose drawings, illustrations, paintings and comics have been published and exhibited internationally. He teaches at OCAD University and Seneca College. He has also illustrated Seamus's Short Story, The Snuggly and Moon Wishes. He lives with his family in Toronto.
Loading...
or support indie stores by buying on