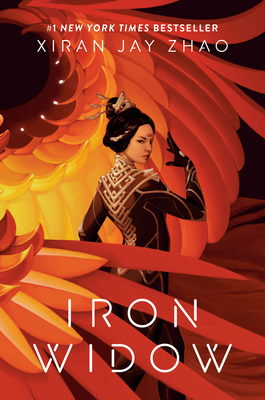 Pacific Rim meets The Handmaid's Tale in this blend of Chinese history and mecha science fiction for YA readers.

The boys of Huaxia dream of pairing up with girls to pilot Chrysalises, giant transforming robots that can battle the mecha aliens that lurk beyond the Great Wall. It doesn't matter that the girls often die from the mental strain.

When 18-year-old Zetian offers herself up as a concubine-pilot, it's to assassinate the ace male pilot responsible for her sister's death. But she gets her vengeance in a way nobody expected—she kills him through the psychic link between pilots and emerges from the cockpit unscathed. She is labeled an Iron Widow, a much-feared and much-silenced kind of female pilot who can sacrifice boys to power up Chrysalises instead.​

To tame her unnerving yet invaluable mental strength, she is paired up with Li Shimin, the strongest and most controversial male pilot in Huaxia​. But now that Zetian has had a taste of power, she will not cower so easily. She will miss no opportunity to leverage their combined might and infamy to survive attempt after attempt on her life, until she can figure out exactly why the pilot system works in its misogynist way—and stop more girls from being sacrificed.

"Like its ferocious heroine, Iron Widow is brutal, bloodthirsty, and full of rage. Zetian's fight to shatter patriarchal definitions of power makes for a truly thrilling read." —Julie C. Dao, author of Forest of a Thousand Lanterns

“Zetian is the take-no-prisoners heroine you’ll love to cheer on as she crushes everyone who tries to bring her down.” —Rebecca Schaeffer, author of Not Even Bones

"A bold and brash story that will grab you by the throat from page one. Zhao expertly weaves a story that polishes off classic sci-fi themes and re-imagines them in a lush futuristic world inspired by Ancient China. With an unapologetic heroine who pushes so far beyond the boundaries of expectations, the reader will go on a journey of twists and turns that will make them gasp with each page turn. Thrilling, heart-wrenching, and epic!” —Kat Cho, internationally bestselling author of Vicious Spirits

"In Iron Widow, Zhao crafts a thrilling, brutal tale with jaw-dropping action and a fierce and unyielding heroine. Zetian is unstoppable, and I dare you not to cheer her on." —Elizabeth Lim, bestselling author of Spin the Dawn

"Iron Widow is a gut punch from the very first pages. The action is riveting. The story relentless. The heroine ruthless and unapologetic. Zetian is here to set the world on fire, and her pursuit of vengeance is thrilling and empowering to behold. Sit back and enjoy the show—and stay the hell out of her way." —Nicki Pau Preto, author of Crown of Feathers

"A searing, cinematic, gut-punch of a tale, Iron Widow is both wickedly fun and brutally incisive when it comes to the Chinese history and culture it draws inspiration from. There’s no resisting Wu Zetian; once she sinks her claws in you, you’ll be racing alongside her to a shocking, subversive end." —Joan He, New York Times–bestselling author of The Ones We're Meant to Find

"Absolutely epic. This is the historical-inspired, futuristic sci-fi mash-up of my wildest dreams. Iron Widow charges headfirst into a world of giant mechas and uncompromising characters. The brutal beauty of Xiran Jay Zhao’s writing kept me glued to the page from start to finish." —Chloe Gong, New York Times–bestselling author of These Violent Delights

XIRAN JAY ZHAO is a first-gen immigrant from small-town China who was raised by the Internet​. A recent graduate of Vancouver’s Simon Fraser University, they wrote science fiction and fantasy while they probably should have been studying more about biochemical pathways. You can find them on Twitter for memes, Instagram for cosplays and fancy outfits, and YouTube for long videos about Chinese history and culture. Iron Widow is their first novel.
Loading...
or support indie stores by buying on