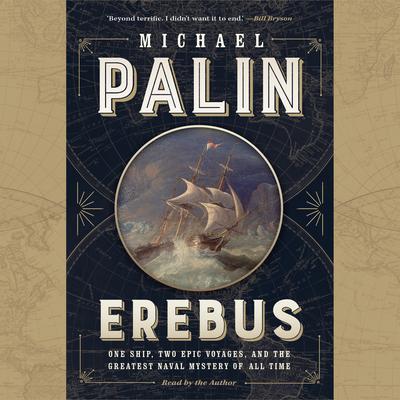 Intrepid voyager, writer and comedian Michael Palin follows the trail of two expeditions made by the Royal Navy's HMS Erebus to opposite ends of the globe, reliving the voyages and investigating the ship itself, lost on the final Franklin expedition and discovered with the help of Inuit knowledge in 2014.

The story of a ship begins after the defeat of Napoleon at Waterloo, when Great Britain had more bomb ships than it had enemies. The solid, reinforced hulls of HMS Erebus, and another bomb ship, HMS Terror, made them suitable for discovering what lay at the coldest ends of the earth.
In 1839, Erebus was chosen as the flagship of an expedition to penetrate south to explore Antarctica. Under the leadership of the charismatic James Clark Ross, she and HMS Terror sailed further south than anyone had been before. But Antarctica never captured the national imagination; what the British navy needed now was confirmation of its superiority by making the discovery, once and for all, of a route through the North-West Passage.
Chosen to lead the mission was Sir John Franklin, at 59 someone many considered too old for such a hazardous journey. Nevertheless, he and his men confidently sailed away down the Thames in April 1845. Provisioned for three winters in the Arctic, Erebus and Terror and the 129 men of the Franklin expedition were seen heading west by two whalers in late July.
No one ever saw them again.
Over the years there were many attempts to discover what might have happened--and eventually the first bodies were discovered in shallow graves, confirming that it had been the dreadful fate of the explorers to die of hunger and scurvy as they abandoned the ships in the ice.
For generations, the mystery of what had happened to the ships endured. Then, on September 9th, 2014, came the almost unbelievable news: HMS Erebus had been discovered thirty feet below the Arctic waters, by a Parks Canada exploration ship.
Palin looks at the Erebus story through the different motives of the two expeditions, one scientific and successful, the other nationalistic and disastrous. He examines the past by means of the extensive historical record and travels in the present day to those places where there is still an echo of Erebus herself, from the dockyard where she was built, to Tasmania where the Antarctic voyage began and the Falkland Islands, then on to the Canadian Arctic, to get a sense of what the conditions must have been like for the starving, stumbling sailors as they abandoned their ships to the ice. And of course the story has a future. It lies ten metres down in the waters of Nunavut's Queen Maud Gulf, where many secrets wait to be revealed.

MICHAEL PALIN is a scriptwriter, comedian, novelist, television presenter, actor and playwright, and is a former president of the Royal Geographical Society. He established his reputation with Monty Python's Flying Circus and Ripping Yarns. His work also includes several films with Monty Python, as well as The Missionary, A Private Function, A Fish Called Wanda, American Friends and Fierce Creatures. His television credits include two films for the BBC's Great Railway Journeys, the plays East of Ipswich and Number 27, and Alan Bleasdale's GBH. He has written books to accompany his eight very successful travel series including Himalaya and Pole to Pole, as well as three volumes of his diaries. He is the author of a number of children's stories, the play The Weekend and the novels Hemingway's Chair and The Truth.