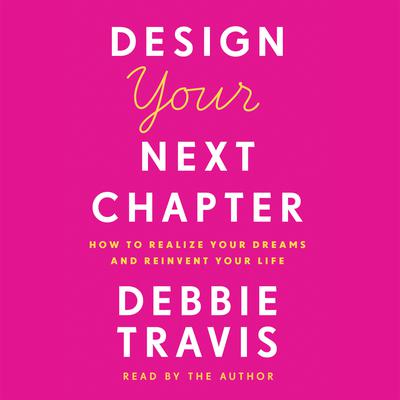 Design Your Next Chapter (Digital Audiobook)

How to realize your dreams and reinvent your life

If you feel stuck with no idea what you should do next, lifestyle celebrity and TV pioneer Debbie Travis's new book is for you. Drawing on the tough (sometimes hilarious) lessons Debbie learned in her own leap into a new way of living, and a multitude of stories, tips and ideas to jumpstart your dreams, she's created an inspiring roadmap for change.

A few years ago, Debbie Travis realized that she was no longer challenged by her wildly successful TV career and she was so busy she was missing out on the people and things that made her happy. She dared to dream about a whole new direction in life--a plan to turn a 13th-century farmhouse in Tuscany into a unique hotel and retreat for people who need a change as much as she did. And now, after a crazy amount of work, she is not only living that dream but sharing it with others.
Her new book draws directly on her own experiences (when she started, Debbie could barely make a bed, let alone run a hotel in a foreign county) and the uplifting stories of personal u-turns shared by women who have come to her retreats. Debbie's "commandments" will inspire women (and men) who have lost track of who they are or what they want to be; who are going through the motions of a career that doesn't satisfy them anymore; who are wondering what to do with themselves now that their kids are gone or their marriage is over. On every page, Debbie shares the tools that helped her transform her life, and her example, her wit and her common sense advice will help motivate anyone who finds themselves standing at a crossroads wondering "What's next for me?"

DEBBIE TRAVIS is an international television icon, a bestselling author, a newspaper columnist, a sought-after public speaker and the centre of a small business empire. Her shows, Debbie Travis' Painted House, Debbie Travis' Facelift, From The Ground Up and All For One--and most recently the six-part documentary, La Dolce Debbie, about how she transformed a 13th-century Tuscan farmhouse into a hotel and retreat--have been seen in Canada, the United States and 80 other countries. She has authored nine previous books (eight on decorating); Oprah has called her "the master of paint and plaster." Having stepped back from TV producing, she gets to relax, just a little, running a luxury boutique hotel where like-minded women can experience the Tuscan lifestyle at her Girls' Getaways and a 100-acre farm where she produces an organic Extra Virgin Olive Oil and a variety of lavender products. Debbie shares her journey with her husband, Hans, and two sons, Josh and Max.