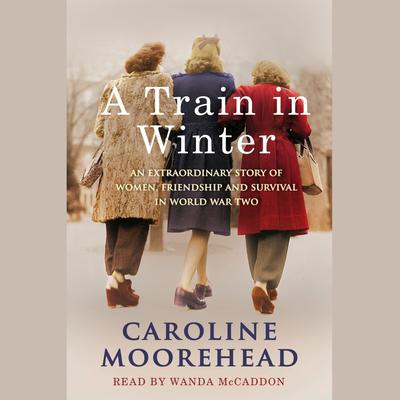 A Train in Winter (Digital Audiobook)

An Extraordinary Story of Women, Friendship and Survival in World War Two

“How can you do this work if you have a child?” asked her mother.

“It is because I have a child that I do it,” replied Cecile. “This is not a world I wish her to grow up in.”

On January 24, 1943, 230 women were placed in four cattle trucks on a train in Compiegne, in northeastern France, and the doors bolted shut for the journey to Auschwitz. They were members of the French Resistance, ranging in age from teenagers to the elderly, women who before the war had been doctors, farmers’ wives, secretaries, biochemists, schoolgirls. With immense courage they had taken up arms against a brutal occupying force; now their friendship would give them strength as they experienced unimaginable horrors. Only forty-nine of the Convoi des 31000 would return from the camps in the east; within ten years, a third of these survivors would be dead too, broken by what they had lived through. In this vitally important book, Caroline Moorehead tells the whole story of the 230 women on the train, for the first time. Based on interviews with the few remaining survivors, together with extensive research in French and Polish archives, A Train in Winter is an essential historical document told with the clarity and impact of a great novel.

Caroline Moorehead follows the women from the beginning, starting with the disorganized, youthful and high-spirited activists who came together with the Occupation, and chronicling their links with the underground intellectual newspapers and Communist cells that formed soon afterwards. Postering and graffiti grew into sabotage and armed attacks, and the Nazis responded with vicious acts of mass reprisal – which in turn led to the Resistance coalescing and developing. Moorehead chronicles the women’s roles in victories and defeats, their narrow escapes and their capture at the hands of French police eager to assist their Nazi overseers to deport Jews, resisters, Communists and others. Their story moves inevitably through to its horrifying last chapters in Auschwitz: murder, starvation, disease and the desperate struggle to survive. But, as Moorehead notes, even in the most inhuman of places, the women of the Convoi could find moments of human grace in their companionship: “So close did each of the women feel to the others, that to die oneself would be no worse than to see one of the others die.”

Uncovering a story that has hitherto never been told, Caroline Moorehead exhibits the skills that have made her an acclaimed biographer and historian. In this book she places the reader utterly in the world of wartime France, casting light on what it was like to experience horrific terrors and face impossible moral dilemmas. Through the sensitive interviews on which the book is based, she tells personal and individual stories of courage, solace and companionship. In this way, A Train in Winter ultimately becomes a valuable memorial to a unique group of heroines, and a testimony to the particular power of women’s friendship even in the worst places on earth.

Caroline Moorehead wrote a column on human rights first for The Times and then for the Independent (1980-91) and made a series of TV programmes on human rights for the BBC (1990-2000). She has written the history of the International Committee of the Red Cross (1998); and has helped to set up a Legal Advice Centre for refugees in Cairo, where she has also started schools and a nursery. Currently she works as a volunteer on the legal team for the Medical Foundation for the Care of Victims of Torture, while also continuing to review and write on human rights in many different papers.

Wanda McCaddon, a winner of several AudioFile awards, has narrated classics such as Vanity Fair and Sense and Sensibility. Additionally, she has narrated a roster of other authors' works, including Virginia Woolf, Barbara Tuchman, Edith Wharton, and W. Somerset Maugham.