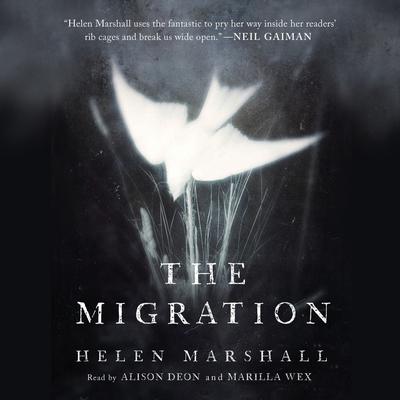 "A dark fable that somehow feels both timeless and urgently topical. The Migration is heart-wringing and powerful, but over and above that, it's just vivid and immersive and enthralling throughout." --M.R. Carey, author of The Girl with All the Gifts

When I was younger I didn't know a thing about death. I thought it meant stillness, a body gone limp. A marionette with its strings cut. Death was like a long vacation--a going away. Not this.

Storms and flooding are worsening around the world, and a mysterious immune disorder has begun to afflict the young. Sophie Perella is about to begin her senior year of high school in Toronto when her little sister, Kira, is diagnosed. Their parents' marriage falters under the strain, and Sophie's mother takes the girls to Oxford, England, to live with their Aunt Irene. An Oxford University professor and historical epidemiologist obsessed with relics of the Black Death, Irene works with a Centre that specializes in treating people with the illness. She is a friend to Sophie, and offers a window into a strange and ancient history of human plague and recovery. Sophie just wants to understand what's happening now; but as mortality rates climb, and reports emerge of bodily tremors in the deceased, it becomes clear there is nothing normal about this condition--and that the dead aren't staying dead. When Kira succumbs, Sophie faces an unimaginable choice: let go of the sister she knows, or take action to embrace something terrifying and new.
Tender and chilling, unsettling and hopeful, The Migration is a story of a young woman's dawning awareness of mortality and the power of the human heart to thrive in cataclysmic circumstances.

HELEN MARSHALL is the World Fantasy Award-winning author of two short story collections and two poetry chapbooks. Her stories and poetry have appeared in magazines and anthologies including Abyss & Apex, Lady Churchill's Rosebud Wristlet and Tor.com. She obtained a PhD from the Centre for Medieval Studies at the University of Toronto, and then spent two years completing a postdoctoral fellowship at the University of Oxford investigating literature written during the time of the Black Death. Helen has worked as a managing editor for ChiZine Publications, and was recently hired as a permanent Lecturer in Creative Writing and Publishing at Anglia Ruskin University in Cambridge. She grew up in Sarnia, Ontario, and now resides in Cambridge. The Migration is her first novel.