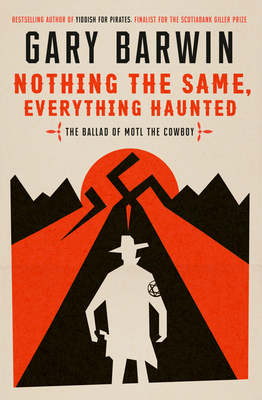 Nothing the Same, Everything Haunted

The Ballad of Motl the Cowboy

Praise For Nothing the Same, Everything Haunted: The Ballad of Motl the Cowboy…

WINNER OF THE 2021 CANADIAN JEWISH LITERARY AWARD FOR FICTION

“[A] boundary-pushing [and] . . . very funny book. . . . There are few voices in Canadian writing as original as Barwin’s.” —Toronto Star

“[Gary Barwin] proves again why he’s one of the most distinct voices in Canadian lit.” —The Globe and Mail

“[D]arkly humorous and affecting . . . the fantastic one-liners deepen the poignancy of the horrors. This inventive, madcap novel is a stunning testament to Jewish humor and survival.” —Publishers Weekly

“Barwin is a talented and prolific artist . . . and this novel showcases his signature style and strengths: acrobatic language bursting with puns, rhyme, alliteration and all manner of wordplay, madcap escapades, and a sprinkle of slapstick. . . . This wildly inventive novel plays by its own rules. In Barwin’s world, imagination is freedom, and comedy, courage.” —Quill & Quire

“This is a novel steeped in history and truths—and ingenuity. . . . An adventure story set in horrific times, this novel manages to be darkly funny and packed with wisdom.” —The Globe and Mail

"Barwin's second novel deserves the same attention as his first; it takes risks with an even more ambitious premise, is filled with delightful wordplay and poetic language and, like Yiddish for Pirates, there is simply not anything else out there quite like it.” —Winnipeg Free Press

“A fierce and funny horse ride through hell, told with brio.” —Yann Martel, author of Life of Pi

“A hilarious and life-affirming adventure, equal parts Sound of Music, Blazing Saddles and matzo ball soup. This is Barwin’s tallest and deepest tale yet, a crackers modern Western that meditates (as it moseys) on compassion, kinship and the absurdity of atrocity.” —Sean Michaels, author of The Wagers

“This is the most wildly inventive novel I have read in decades, and Gary Barwin is the enormously talented wordsmith who has pulled it off! It begins in the nightmare of the Holocaust in Nazi-occupied Lithuania and travels across Europe and North America examining the plight both of Jews and Indigenous peoples. And through it all we find jokes based on cowboy themes. Jokes! What are jokes doing among these calamities? Displacing the horror, easing the way, making the tragedies, if not bearable, at least something one can talk about without incessant weeping in a world haunted by the past.” —Antanas Sileika, author of Provision Yours

GARY BARWIN is a writer, composer, and multidisciplinary artist and the author of twenty-three books of poetry, fiction and books for children. His recent national bestselling novel, Yiddish for Pirates, won the Stephen Leacock Medal for Humour as well as the Canadian Jewish Literary Award and the Hamilton Literary Award. It was also a finalist for both the Scotiabank Giller Prize and the Governor General's Literary Award for Fiction. For It Is a Pleasure and a Surprise to Breathe: New and Selected Poems was also recently published to much acclaim. A PhD in music composition, Barwin has taught creative writing at a number of colleges and universities. His prose and poetry has been published in hundreds of magazine and journals internationally--from Reader's Digest to Granta and the Walrus. Born in Northern Ireland to South African parents of Ashkenazi descent, Barwin lives in Hamilton, Ontario.
Loading...
or support indie stores by buying on