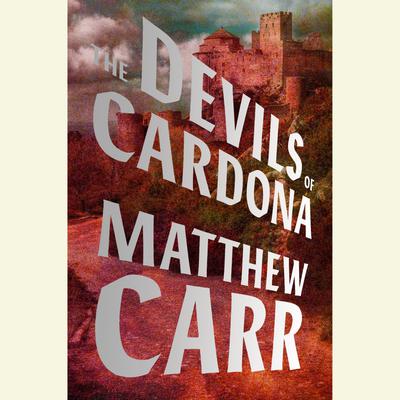 The Devils of Cardona (Digital Audiobook)

"A thrilling quest for justice... [A] novel that is as exciting as it is enlightening from its first pages to its satisfying end.” —The New York Times Book Review

“A page-turner in the proper sense… Mr. Carr has written a gripping and enjoyable novel.” —The Wall Street Journal

The gripping story of the dangerous high-stakes worlds of politics and religion in sixteenth-century Spain as a mysterious Muslim killer retaliates against the Catholic Church.

In March 1584, the priest of Belamar de la Sierra, a small town in Aragon near the French border, is murdered in his own church. Most of the town’s inhabitants are Moriscos, former Muslims who converted to Catholicism. Anxious to avert a violent backlash on the eve of a royal visit, an adviser to King Philip II appoints local magistrate Bernardo de Mendoza to investigate. A soldier and humanist, Mendoza doesn’t always live up to the moral standards expected of court officials, but he has a reputation for incorruptibility.

From the beginning, Mendoza finds almost universal hatred for the priest. And it isn’t long before he’s drawn into a complex and dangerous world in which greed, fanaticism, and state policy overlap. And as the killings continue, Mendoza's investigation is overshadowed by the real prospect of an ethnic and religious civil war.

By turns an involving historical thriller and a novel with parallels to our own time, The Devils of Cardona is an unexpected and compelling read.

Matthew Carr is a writer, a journalist, a blogger, and the author of several books of nonfiction, including Blood and Faith: The Purging of Muslim Spain. He has written for a variety of publications, including The New York Times, The Observer, The Guardian, and others. He lives in the United Kingdom with his family. The Devils of Cardona is Carr’s first novel.