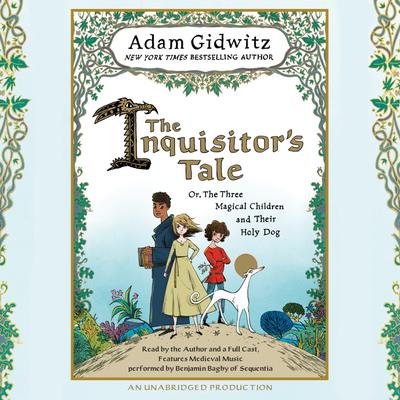 Or, The Three Magical Children and Their Holy Dog

The bestselling author of A Tale Dark and Grimm takes on medieval times in an exciting and hilarious new adventure about history, religion . . . and farting dragons.

1242. On a dark night, travelers from across France cross paths at an inn and begin to tell stories of three children: William, an oblate on a mission from his monastery; Jacob, a Jewish boy who has fled his burning village; and Jeanne, a peasant girl who hides her prophetic visions. They are accompanied by Jeanne's loyal greyhound, Gwenforte . . . recently brought back from the dead.
As the narrator collects their tales, the story of these three unlikely allies begins to come together.

Their adventures take them on a chase through France to escape prejudice and persecution and save precious and holy texts from being burned. They’re taken captive by knights, sit alongside a king, and save the land from a farting dragon. And as their quest drives them forward to a final showdown at Mont Saint-Michel, all will come to question if these children can perform the miracles of saints.

Adam Gidwitz is the author of the critically-acclaimed, New York Times bestselling Grimm trilogy. His debut novel, A Tale Dark & Grimm was an E. B. White Read Aloud Finalist and a selection on the Today Show's Al's Book Club for Kids. His books have been on countless state award and “Best of” lists. A former teacher at St. Ann’s in Brooklyn, Adam, who now writes full time, spent a year in France researching An Inquisitor’s Tale. He lives with his family in Brooklyn, NY.