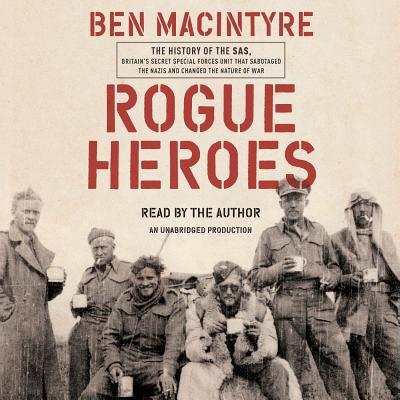 The History of the SAS, Britain's Secret Special Forces Unit That Sabotaged the Nazis and Changed the Nature of War

The incredible untold story of WWII’s greatest secret fighting force, as told by our great modern master of wartime intrigue

Britain’s Special Air Service—or SAS—was the brainchild of David Stirling, a young, gadabout aristocrat whose aimlessness in early life belied a remarkable strategic mind. Where most of his colleagues looked at a battlefield map of World War II’s African theater and saw a protracted struggle with Rommel’s desert forces, Stirling saw an opportunity: given a small number of elite, well-trained men, he could parachute behind enemy lines and sabotage their airplanes and war material. Paired with his constitutional opposite, the disciplined martinet Jock Lewes, Stirling assembled a revolutionary fighting force that would upend not just the balance of the war, but the nature of combat itself. He faced no little resistance from those who found his tactics ungentlemanly or beyond the pale, but in the SAS’s remarkable exploits facing the Nazis in the Africa and then on the Continent can be found the seeds of nearly all special forces units that would follow.

Bringing his keen eye for psychological detail to a riveting wartime narrative, Ben Macintyre uses his unprecedented access to SAS archives to shine a light inside a legendary unit long shrouded in secrecy. The result is not just a tremendous war story, but a fascinating group portrait of men of whom history and country asked the most.

Praise For Rogue Heroes: The History of the SAS, Britain's Secret Special Forces Unit That Sabotaged the Nazis and Changed the Nature of War…

“Ben Macintyre’s suspenseful new book, Rogue Heroes, about the founding of Britain’s S.A.S. during World War II, reads like a mashup of 'The Dirty Dozen' and 'The Great Escape,' with a sprinkling of “Ocean’s 11” thrown in for good measure… Mr. Macintyre draws sharp, Dickensian portraits of these men, and he displays his usual gifts here for creating a cinematic narrative that races along… Mr. Macintyre is masterly in using details to illustrate his heroes’ bravery, élan and dogged perseverance…a gripping account of the early days of S.A.S.”
—Michiko Kakutani, New York Times

"Rogue Heroes is a terrific story of human enterprise, endurance and achievement and vividly brings to life an extraordinary cast of characters…. An absorbing story of derring-do, told with skill and flair.”
—Wall Street Journal

“[A] riveting new history… Macintyre has produced yet another wonderful book… even minor characters bristle with life.... This is the spot in the book review where I’m supposed to find some point to quibble with, some omission, some historical inaccuracy, some flaw. Sorry to disappoint. The fact is Macintyre has produced yet another wonderful book. As Captain What What might have put it, this is a ripping good read.”
—The Washington Post

"Rogue Heroes is a thrilling saga, breathtakingly told, full of daring and heroes… One of the many virtues of this volume… is the surprising small asides tucked into these pages, tiny truths that give the book depth along with derring-do.”
—The Boston Globe

“Rogue Heroes is the best and most complete version of the tale...a highly enjoyable and entertaining narrative.”
—New York Times Book Review

“One of the remarkable aspects of Macintyre’s authorized-if-not-official history is that he keeps a cool hand on the theatrics…while maintaining an edge-of-the-seat narrative. The exploits have an authentic feel…and it is no easy thing to capture the spell of dire circumstance and distill it in such a way to be experiential to those who’ve never spent a moment wondering where in the darkness that sniper is.”
—Christian Science Monitor

“[This] entertaining World War II history will keep you tossing and alert late into the night.”
—Florida Times-Union

“Rogue Heroes provides an inside look at an important struggle.”
—Galveston Daily News

“Mr. Macintyre demonstrates superb skill as a journalist and a writer in this riveting book that takes readers into a long-past and still-frightening world of what real war was like.”
—The Washington Times

“[A] well-written and comprehensive history . . . Macintyre uses unprecedented access to the SAS official records, along with memoirs, diaries, and interviews with the few surviving veterans, to chronicle the major operations, key personalities, successes, and failures of the regiment in WWII. He vividly captures the bravery and the sheer audaciousness of the SAS troopers and their leadership operating hundreds of miles behind enemy lines. . . . Macintyre delivers a solid history and an enjoyable read that will appeal to those interested in military history as well as readers who enjoy real-life tales of adventure.”
—Publishers Weekly

“Told with brilliance. The SAS are still about the best of their kind, and how they began to achieve this is an exotic saga indeed. No one will ever tell it better than this.”
—Evening Standard

“Follows the SAS from its early days in north Africa to the end of the war. Throughout the tales of scarcely believable heroism, derring-do, courage, camaraderie and endurance come faster than the bullets out of a Vickers machine gun. Meticulously researched. Macintyre has written about a fascinating subject in a way that would make any thriller writer proud. As a work of military history it is thorough and highly entertaining. It would be nigh on impossible to praise it too highly.”
—Daily Express

“A refreshing account of the origins of the regiment of balaclava-clad silent killers during the Second World War. Macintyre has a wonderful eye for eccentricity, and the narrative is peppered with extraordinary characters. At times there is more than a whiff of PG Wodehouse or Evelyn Waugh.”
—Evening Standard (A Book of the Year)

“Macintyre tells it with flair. A great read of wartime adventuring.”
—Richard Overy, The Guardian

“Ben Macintyre's coverage of the SAS in north Africa and, later, Italy, France and Germany, is brilliant, blending gripping narratives of fighting with descriptions of the fears of individual soldiers before battle and their reactions to its horror. Britain's martial pantheon is full of outnumbered heroes who wouldn't throw in the sponge. Henry V's band of brothers at Agincourt, the redcoats at Waterloo, the defenders of Rorke's drift, and the paras who charged at Goose Green are part of the tradition that embraces the SAS. This book explains why.”
—The Times

“Fascinating, entertaining, insightful, thoughtful. Macintyre tells the story of the early years of the SAS with panache.”
—Mail on Sunday

“Macintyre writes with the diligence and insight of a journalist, and the panache of a born storyteller.”
—John Banville, author of The Sea and The Untouchable

“By far the best book on the SAS in World War II—impeccably researched and superbly told.”
—Antony Beevor, author of D-Day and Stalingrad

“We all have to come from somewhere. Rogue Heroes gives a glimpse deep down the rabbit hole into how the special forces world started. This is a great look at how a motivated bunch of badasses changed the tide of war and carved the path for the rest of us to follow.”
—Marcus Luttrell, former U.S. Navy SEAL and author of Lone Survivor

'Accessible yet authoritative. Delivers stories of tremendous adventure and derring-do, but also offers more than straightforward military history. This book has many strengths but perhaps its greatest is how thought-provoking it is'
—Laurence Rees, author of World War II Behind Closed Doors

BEN MACINTYRE is a writer-at-large for The Times (UK) and the bestselling author of The Spy and the Traitor, A Spy Among Friends, and Rogue Heroes, among many others. Macintyre has also written and presented BBC documentaries of his work.
Loading...
or
Not Currently Available for Direct Purchase