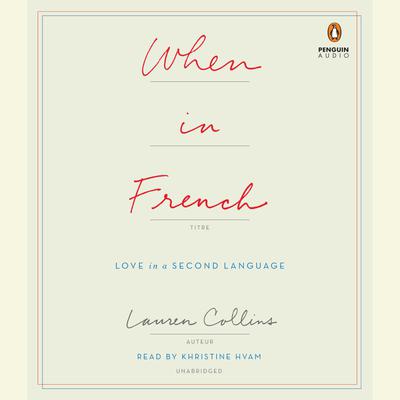 When in French (Digital Audiobook)

Love in a Second Language

A language barrier is no match for love. Lauren Collins discovered this firsthand when, in her early thirties, she moved to London and fell for a Frenchman named Olivier—a surprising turn of events for someone who didn’t have a passport until she was in college. But what does it mean to love someone in a second language? Collins wonders, as her relationship with Olivier continues to grow entirely in English. Are there things she doesn’t understand about Olivier, having never spoken to him in his native tongue? Does “I love you” even mean the same thing as “je t’aime”? When the couple, newly married, relocates to Francophone Geneva, Collins—fearful of one day becoming "a Borat of a mother" who doesn’t understand her own kids—decides to answer her questions for herself by learning French.

When in French is a laugh-out-loud funny and surprising memoir about the lengths we go to for love, as well as an exploration across culture and history into how we learn languages—and what they say about who we are. Collins grapples with the complexities of the French language, enduring excruciating role-playing games with her classmates at a Swiss language school and accidently telling her mother-in-law that she’s given birth to a coffee machine. In learning French, Collins must wrestle with the very nature of French identity and society—which, it turns out, is a far cry from life back home in North Carolina. Plumbing the mysterious depths of humanity’s many forms of language, Collins describes with great style and wicked humor the frustrations, embarrassments, surprises, and, finally, joys of learning—and living in—French.

Lauren Collins began working at the New Yorker in 2003 and became a staff writer in 2008. Her subjects have included Michelle Obama, Donatella Versace, the graffiti artist Banksy, and the chef April Bloomfield. Since 2010, she has been based in Europe, covering stories from London, Paris, Copenhagen, and beyond. Her story on the Daily Mail was recently short-listed for the Feature Story of the Year by the Foreign Press Association in London.