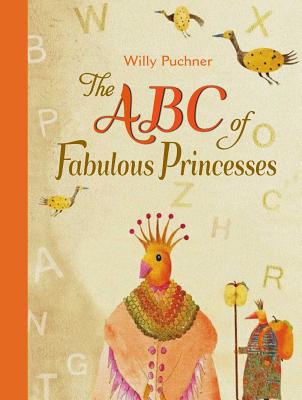 The ABC of Fabulous Princesses

An alphabet of peerless princesses—from Anna of Amsterdam to Zenobia of Zurich—by the acclaimed Austrian designer Willy Puchner.

Meet the princesses from A to Z. Some are ambitious, some bashful, some dangerous . . . but each of the twenty-six feathered empresses possess a uniquely charming character and come bearing an extraordinary gift for Prince William. Puchner’s opulent and incomparable illustrations make this abecedary a marvel for all ages.

Willy Puchner, born in 1952 in Lower Austria, works as a photographer, designer, and author in Oberschützen, Vienna, and beyond. After studying philosophy and history, he followed his desires and visited distant cities: New York, Sydney and Paris, Venice, Tokyo, Honolulu, Rome, and Cairo. He has published numerous books, shows his paintings in exhibitions, publishes in magazines, and leads workshops and lectures. Puchner’s The ABC of Fabulous Princesses and The ABC of Fantastic Princes have been praised for their inventiveness. This is his third book for NorthSouth Books.
or support indie stores by buying on