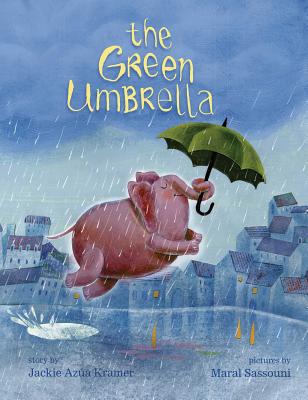 A 2017 Bank Street Best Children's Book of the Year.

Things aren’t always what they seem in this charming tale of imagination, sharing and friendship.

When Elephant takes a peaceful walk with his green umbrella, he’s interrupted by Hedgehog, Cat, Bear, and Rabbit—all claiming that they’ve had exciting adventures with his umbrella. After all, it is an umbrella, and it certainly hasn’t been on any adventures more exciting than a walk in the rain. Or has it?

Jackie Azúa Kramer and illustrator Maral Sassouni both make their debut in this fun read-aloud!

Praise For The Green Umbrella…

Illustrated in spreads that alternate the rainy-day narrative in vignettes with full-bleed spreads that allow the flight-of-fancy retellings to render a deeper mood, the animals' stories are delightfully descriptive...The lesson about sharing and generosity is elegantly wrapped around lovely language.
— Kirkus Reviews

A sweet story of a blossoming friendship between five lovable and imaginative characters, united by one special green umbrella. I want to jump right in to the lush paintings and join in their fun!
— Lauren Castillo, Author/ Illustrator of Caldecott Honor Book "Nana in the City"

Whimsical and cartoonlike animals, depicted with a touch of vintage style, will delight readers as the story shows all the imaginative ways an umbrella can be used. The brightly colored acrylic illustrations complement the conversational text, which is suitable to read aloud to an audience.
— Mindy Hiatt, Salt Lake County Library Services

Here is a story for those who love an object, be it a blanket, a toy, or in this case a green umbrella, so much so that it's very being is imbued with memories that make it unmistakably yours. And a story for those who have lost one such object and wish more than anything to have it back. Azúa Kramer reminds us all that many memories can be shared over a single prized possession. And as Sassouni's art plays in the worlds of joy and longing over a green umbrella, we see a group of characters come together to discover what they can offer another in need. There's no mistaking how easy it is to share this book.
— Matthew Winner, All the Wonders Podcast

The text provides just the right amount of tension and repetition to propel the story forward at a nice pace. Reminiscent of Joan L. Nodset’s classic Who Took the Farmer’s Hat?
— Randall Enos

Jackie Azúa Kramer was born in Manhattan, New York. Many lives ago Jackie was an actor, singer, and school counselor. Her work with children presented her with an opportunity to address their concerns, secrets, and hopes through storytelling. Many of Jackie's best ideas happen in a bathtub full of bubbles. Jackie and her family live happily in Long Island, New York. The Green Umbrella is Jackie's first picture book. Visit jackie at www.jackieazuakramer.com

Maral Sassouni was born in Philadelphia, Pennsylvania. She has been an illustrator for more than 20 years. In 2013 she won the SCBWI Portfolio Grand Prize. Her work was selected by the Society of Illustrators in New York (2014), and also honored by the 3x3 Picture Book Show in 2012, 2013 and 2014.

Her art has been exhibited in group shows of children’s illustration all over the world: in Sàrmede, Italy, for the Immagini della Fantasia exhibit (2011, 2012); in Mexico City, at the Museo Franz Mayer in conjunction with the IBBY Congress of 2014; in South Korea, at the 2013 Nami Island Illustration exhibit. Also in Geneva, at the United Nations Headquarters, and in Brussels, at the European Parliament.
Loading...
or
Not Currently Available for Direct Purchase