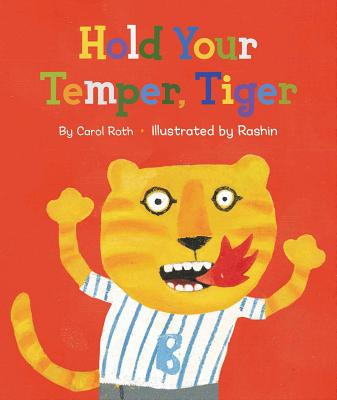 A playful look at managing tempers for tigers of every age.

Little Tiger has a temper! He stomps his paws, cries, and growls when he doesn't want to do something. But when his mom says “Hold your temper or else,” Little Tiger has to make some changes. Where will he hold his temper? In his pocket . . . in his underwear?

Praise For Hold Your Temper, Tiger…

Painted in forceful shades of red, blue, yellow, and green, Rashin’s artwork makes a big impact; readers will easily recognize parts of themselves in this cranky, golden-furred hero. Little Tiger’s solution (stuffing his temper under his baseball cap) is mostly played for laughs, but the idea of decentering angry emotions could still prove useful for the tantrum prone.
— Publishers Weekly

...Roth uses the cap to suggest that it’s OK for Little Tiger to express himself privately without completely losing his temper. Rashin’s bold red background conveys the overall mood of the story, and the quirky pictures of Little Tiger exhaling blue, green, and red flames (some with ghoulish expressions) add a comical element to a tale about the frustrating difficulties of handling emotions.
— Etta Anton, Yeshiva of Central Queens, NY

Rashin Kheiriyeh was born in Iran and now lives in Washington, DC. She is one of the most outstanding young Iranian illustrators working today. She has been awarded the Golden Apple of Bratislava and was selected for the 2013 Bologna Book Fair Illustrators Exhibit and a 2014 IBBY Honor. Among her many books are Two Parrots, There Was an Old Lady Who Swallowed a Fly, and The Seven Voyages of Sinbad the Sailor—her first books published in the United States.
or support indie stores by buying on