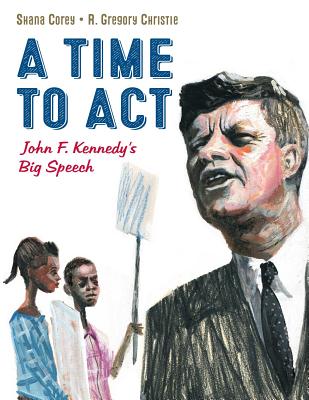 A Time to Act

From prominent leaders such as Martin Luther King, Jr. and Jackie Robinson to children and teenagers, it was the people speaking out and working for civil rights through sits-ins, freedom rides, and marches who led John F. Kennedy to take a stand.

This is the story of JFK—from his childhood to the events that led to his game-changing speech and the Civil Rights Act of 1964. Corey and Christie offer a deeply human look at our country’s thirty-fifth president, underscoring how each one of us, no matter who we are, have the power to make a difference.

With quotes from JFK’s speeches, detailed back matter, and a thought-provoking author’s note, this biography—in time for what would be JFK's 100th birthday—offers a sensitive look at a tumultuous time in history and compelling questions about effecting positive change today.

**Starred Review. Excellent. The dramatic and innovative illustrations beautifully capture a place in time and the people who inhabited it. The back matter is powerful addition to a most thoughtful book.
— Booklist

A story of John Kennedy's short but historic life that rings with truth and excitement. Readers of all ages... will appreciate this moving lesson in American history.
— Senator Harris Wofford, President John F. Kennedy's Special Assistant on Civil Rights

...a well-crafted book that respects the complex president Kennedy was, respects child readers, and respects the sometimes thorny intricacies of conviction. Be sure to find a copy, come April.
— Julie Danielson

This is a timely and relevant book...Corey’s prose rings natural and true, and will definitely feel relatable to young teens and ‘tweens who are seeking to define themselves and their principals. Artist R. Gregory Christie’s illustrations of children with elongated necks and determined faces courageously carrying the signs that demand equality all help to loan a collage-ish look and feel to this important book. Use this to teach tolerance, equality, integration, social studies, and the fundamentals of American laws.
— Rita Lorraine Hubbard

Shana Corey has written several picture books, among them Here Come the Girl Scouts!, a New York Times Editors’ Choice, You Forgot Your Skirt, Amelia Bloomer, which the New York Times called “a picture book girls are likely to love.” and The Secret Subway, which Kirkus called "Absolutely wonderful in every way.” Learn more at shanacorey.com.

R. Gregory Christie is a freelance illustrator as well as business owner of GAS-Art Gifts (Gregarious Art Statements), an autographed children’s bookstore and open art studio located in Decatur, Georgia. He is the designer of the 2013 Kwanzaa Forever stamp used by the United States Post Office, and is a recipient of dozens of awards, including the Caldecott Honor Award, the New York Times 10 Best Illustrated Children’s Books of the Year Award and the Coretta Scott King Honor Award in Illustration. His illustrations have been featured on HBO Kids, PBS’s “Between the Lions,” and on the 2013 Congo Square New Orleans Jazz and Heritage Festival poster. One of Mr. Christie’s most notable projects was an animated DVD, narrated by comedian Chris Rock, about the groundbreaking choreographer Janet Collins. Some major collaborators have been Warner Bros., the New York Times, and New York’s Metro Transit Authority, for which one of Christie’s illustrations was featured on subway cars for a year! Mr. Christie has been illustrating for more than twenty years, with more than fifty books to his credit. But his talents go beyond just book illustrations. He does murals and portraits, and is also a writer. He is the author and illustrator of a unique retelling of “Country Mouse, City Mouse” titled Mousetropolis. He also spends his time educating young people about art and literacy at his business, where he works with children as young as three years old. Find out more about Gregory and his store’s services by visiting gas-art.com.
Loading...
or support indie stores by buying on